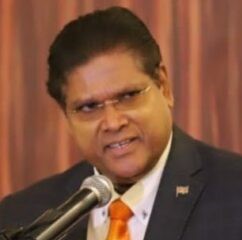 No stone is left unturned when it comes to Suriname securing maximum benefits for its people. In fact, the Surinamese Petroleum Law explicitly mandates that contractors in the oil and gas industry must use local goods and services produced and/or available in Suriname, over that of foreign goods and services.
The law of the Dutch-speaking country goes on to highlight, however, that the only instances where contractors can import those products is if the local conditions are “less than favorable”.

This rule is not only absent from the Local Content Laws of Guyana, but also the draft Local Content Policy that was finalized by United Kingdom Consultant, Dr. Michael Warner—who also happens to be a client of ExxonMobil. Notably, in a series of articles, Kaieteur News had exposed how Dr. Warner had ignored and removed key recommendations to give Guyanese an advantage in the oil sector.

Surinamese Petroleum Laws also mandate that companies are required to provide a report demonstrating the number of employees engaged in petroleum operations in Suriname, identified by nationality to the extent of providing such information does not cause the contractor to violate any laws. This report must be submitted no later than 90 days following the end of each calendar year.

This provision is also missing from the Guyana laws, as well as the Production Signing Agreement (PSA) signed between government and ExxonMobil. In fact, this oil major continues failing to submit a breakdown of the job description, salaries, and even the plans in place to increase this workforce by more than 55%.
Further to this, no data was provided for the public to analyse if there was any progression in the employment of Guyanese to senior positions from 2015 to now. Instead, Exxon continues to make general claims but provides no actual evidence on its use of locals in its operations.