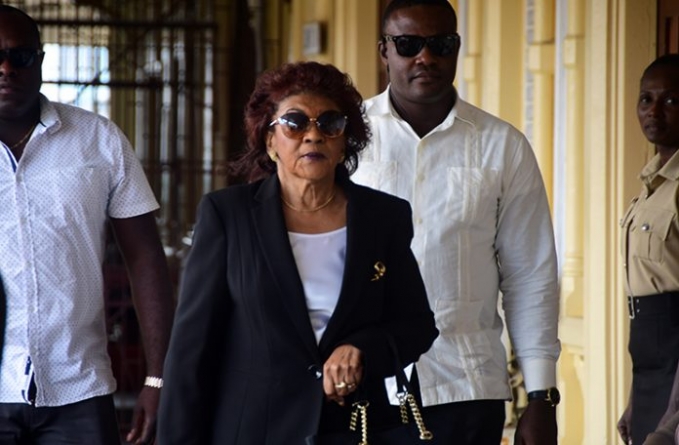 Chairman of the Guyana Elections Commission, Justice (Ret’d) Claudette Singh, through her attorney Kim Kyte-Thomas, objected to the Application for Discovery filed by the Leader of the People’s Progressive Party/Civic (PPP/C) List of Candidates, Bharrat Jagdeo, on the grounds that the application, which seeks to have the Elections Commission lay over the Region 4 Statements of Poll, could only be brought by way of an Election Petition.
“It is submitted that the production of the SOPs is not for an application such as this. These matters would better be canvassed in an elections petition,” Kyte-Thomas told High Court Judge, Franklin Holder in her written submission on behalf of the GECOM Chair.
Jagdeo’s application stems from Fixed Date Application (FDA) filed by Ulita Grace Moore against GECOM, the Chairman of GECOM, and the Chief Elections Officer.

However, it was noted that Jagdeo, by filing the application, intends to introduce the SOPs to challenge the results stated on the declaration of the Region 4 Returning Officer, Clairmont Mingo. “There is a narrow distinction but one nonetheless between this issue and whether there has been compliance of the Returning Officer with his statutory functions relevant to the electoral process pursuant to the elections laws in this jurisdiction,” the Attorney reasoned. Referencing to Article 163 (1) and (4) of the Constitution of Guyana, and the National Assembly (Validity of Elections) Act, Chapter 1:04, Kyte-Thomas iterated that the application must be presented by an Elections Petition. According to the National Assembly (Validity of Elections) Act, an Elections Petition must be brought within 28 days of the declaration of the results of an Election.

In support of her arguments, Kyte-Thomas referenced the case of Gladys Petrie and Others v The Attorney General and Others (1968), in which it was stated that any challenge to the “election process can only be conducted pursuant to an election petition and before an election court.” She argued that, that position was affirmed in the case of George Rick James (In person and as Secretary of the Free and Fair Election League Inc.) v Nathaniel James (Chairman of the Electoral Commission) and others. A similar finding, she further pointed out, was made in N.P. Ponnuswami v Returning Officer, Namakkal Constituency.

“The word “election” within the meaning of Article 232(1) of the Constitution of the Co-operative Republic of Guyana, Laws of Guyana is used and interpreted to mean the whole process of an election which commences with the issue of a proclamation of the election up to the issue of the result of that election. In Seecomar Singh v Butler [1973] 21 WIR the Court held that the elections commenced with the issue of the proclamation by the President,” Kyte-Thomas submitted.

She further submitted that such a challenge cannot be entertained at this time on the basis that it is premature.

Referencing again the case of N.P. Ponnuswami, Kyte-Thomas said it was authoritatively stated that: “any matter which has the effect of vitiating an election should be brought up only at the appropriate stage in an appropriate manner before a special tribunal and should not be brought up at an intermediate stage before any court.”

She said the rationale behind this was explained by Court in N.P. Ponnuswami. It was stated that:

“Having regard to the important functions which the legislatures have to perform in democratic countries, it has always been recognised to be a matter of first importance that elections should be concluded as early as possible according to time schedule and all controversial matters and all disputes arising out of elections should be postponed till after the elections are over, so that the election proceedings may not be unduly retarded or protracted.”

On those grounds, Kyte-Thomas, on behalf of the GECOM Chair, told the High Court that in an effort to prevent the election proceedings from being unduly “retarded or protracted” any challenge to the validity of an election and any dispute or claim of any irregularities or illegalities in relation to an election must be brought by way of an election petition after the result of the election has been made known.

The instant application, Kyte-Thomas submitted, must therefore be refused.
The hearing of the Application for Discovery has been referred. The High Court has taken a decision to first establish whether it has jurisdiction to hear FDA filed by Moore before reviewing any other elections relation matter. Moore has asked the Court to set aside a decision by the Elections Commission to facilitate a National Recount of all the votes cast at the March 2 General and Regional Elections while Jagdeo and a private citizen, Reeaz Holladar, have asked the court to set aside the declaration made by the Region 4 Returning Officer, Clairmont Mingo on March 13, 2020.