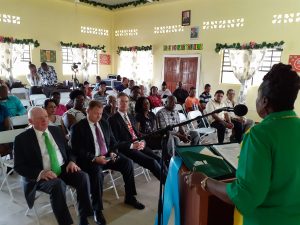 Former Minister Valerie Adams-Yearwood addressing the gathering at Wales, West Bank Demerara back in February, days before the elections. A number of the overseas investors are seated in front.

Days before the March 2nd elections, there were a flurry of announcements by the state-owned National Industrial Commercial and Investments Limited/Special Purpose Unit (NICIL/SPU).
One of the projects was the leasing of 200 acres of former sugar lands at the closed Wales estate, West Bank Demerara.
That sugar estate was the first of four to be closed by the David Granger-led administration for poor performance.

However, more than six months after the deal for a number of investors to build a cold-storage facility, it seems little or no work has been done on the lands.
A visit to the estate and photos taken could find little evidence of construction. Persons who were asked could say little and said they are unaware of any work.
The investors were the same ones for an ambitious, two-hotel project at Ogle, East Coast Demerara where lands, once under sugarcane were allocated, and strategically located in an area not far from a planned four-lane highway linking with the East Bank Demerara.
The investors were planning to build a cold-storage facility that will work with a state-constructed agro-processing project, reporters and others were told at a launching at Wales on February 20th.

It was disclosed then that the investment company, Caribbean Marketing Enterprises Incorporated (CMEI), will secure overseas markets for farmers.
The transaction was being looked at closely as there was interest in Guyana getting value for the assets which once was controlled by the Guyana Sugar Corporation (GuySuCo).
GuySuCo now has only four estates under its belt, down from eight.
The sugar industry nosedived in the last two decades after losing its preferential European market, and facing migration of workers, aging factories and lower world prices.
With little capital injection, Wales was the first to go, sparking deep anger in the mainly Indian-populated community.
The Coalition Government has argued that the loss-making sugar industry has been one of the biggest drags on the economy.

At the Wales area, there were thousands of acres of canelands which had to be divested.
NICIL/SPU had the task of finding investors.
Back in February, the People’s Progressive Party/Civic (PPP/C)- which was then in Opposition… had made it clear that no transaction could be conducted at this time, at least no major ones by the government which is in campaign mode, ahead of a March 2nd elections.
Leading the CMEI investors is well-known Guyana-born, New York-based businessman, Edmon Braithwaite.

At the launching of the cold-storage project in February, Braithwaite told farmers; the then Minister of Agriculture with responsibility for Rural Affairs, Valerie Adams-Yearwood, and others, that his team of investors has the experience to enter almost all sectors in Guyana.
He said that an “incredibly capable” CMEI intends to work with farmers and others in Wales to ensure that their produce meets the market.

One of the investors was announced as Mike Elliott, who CMEI said has experience in building hotels across the world.
According to Rachael Henry, NICIL’s Business Development Officer, the transaction will be clear testimony of the entity’s evolving role. She pointed to the $4B food import bill Guyana is saddled with annually, and pointed out that a number of former sugar workers have been leased lands.