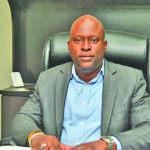 NICIL yesterday said that a document in circulation aimed at exculpating its former executive Colvin Heath-London who is currently under police questioning appears to be a forgery and it will report this to the authorities.

Heath-London, a former acting Chief Executive Officer (CEO) of National Industrial and Commercial Investments Limited (NICIL) remains in police custody after being detained on Friday. His attorney Nigel Hughes yesterday said that his client has been wrongfully held and questioned by the police for the last two days on a decision in which he played no part as it had been taken by the now deceased former CEO Horace James since early 2018.