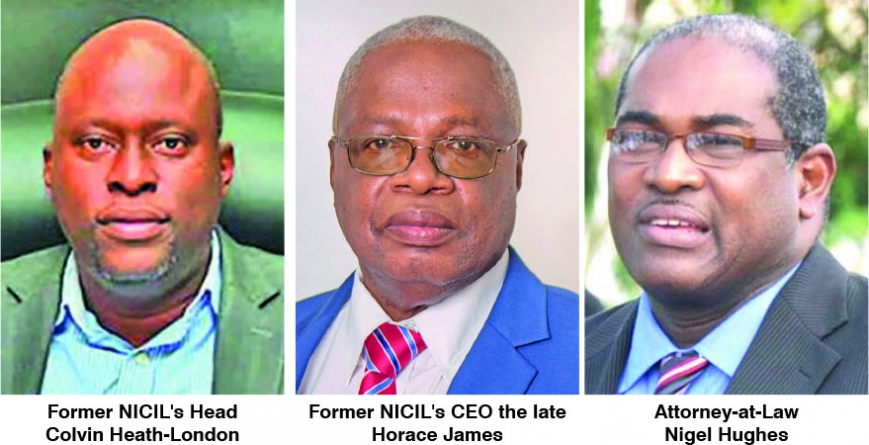 Former National Industrial and Commercial Investments Limited (NICIL) Head Colvin Heath-London and his legal team are pointing the finger at London’s late predecessor Horace James, for the amendments to leases that allowed companies to flip hundreds of acres of State land.
According to a statement issued by Attorney-at-Law Nigel Hughes, who is representing Heath-London, his client was questioned about James, as well as whether he knew the executives who had leased land from NICIL.

Hughes admitted in the statement that some of these leases were missing the clause to ensure that permission had to be sought from NICIL before the land could be sublet. However, he claimed that it was James, who died from cancer last year, who proposed the amendments.
This accusation, however, was debunked by NICIL on Sunday, claiming the document which is currently circulating in the public domain and purports to be part of the minutes of NICIL’s Board Meetings, an official record of NICIL, is fake.

“This unsigned document has been carefully examined by NICIL and it has been concluded that is it neither a document emanating from NICIL nor is it part of the minutes of any Board Meeting of NICIL,” a release from NICIL stated.
It further stated that NICIL’s Board Meetings are recorded and minuted by the company secretary in a particular style and format and all such minutes and records are kept by the company secretary.
“The document currently in circulation is absolutely inconsistent with and does not meet the standardised format of NICIL Board Meeting minutes or any NICIL document.”
In the circumstances, NICIL intends to approach the Guyana Police Force [to] investigate that document as an alleged forgery.

However, Hughes in a statement on Sunday relied on the alleged forged document to offer an electorate “explanation”. He claimed that “The CEO [Horace James] opined that the nation’s inability to secure capital to facilitate business alliances such as joint venture arrangements may be stymied. It was therefore put forward by the CEO [Horace James] that lease transactions should be amended to facilitate subletting thus creating a more competitive platform for local companies and nationals to benefit from this new business opportunity.”
Hughes claimed, it was decided that the NICIL CEO would treat with the commissioning of valuation and survey reports and the preparation of leases to qualified applicants to facilitate onward subletting by all approved leases.

It was also decided that industrial parks lease transactions would be formulated immediately for the Peters Hall area, where the flipping of land took place, as well as other areas in Berbice and Demerara. These areas, according to the lawyer, were identified as possible industrial park developments sites.
He explained that this took place before Heath-London became CEO. At the time, his client was the head of the Special Purpose Unit (SPU). He noted that when Heath-London became the Head of NICIL, James informed him of the plans which were on stream for the Peters Hall area to be designated as an industrial park to support of Guyana’s new oil and gas sector.
Hughes claimed that his client has broken no law. Hughes also contended that his client is being unlawfully detained, having gone into the police voluntarily on Friday and being arrested and questioned in video-recorded interviews ever since.

Besides James and the leaseholders, Hughes claimed that London was also questioned about Sworn Land Surveyor Timothy Fisher. He was also questioned whether he was aware of any Board or Cabinet approval for the leases which required written permission from NICIL before they could sublet the properties.
“Mr Heath-London after being informed that he was a suspect and was entitled to exercise the right to silence accepted the invitation of the investigating officers of the Guyana Police Force and exercised his right to silence.

“Upon the request of Counsel for Mr London that he be admitted to bail on Friday the 20th November 2020 he was informed that a decision had been taken that he should not be admitted to bail and no reason for his detention was provided. Mr London was transported to the Brickdam Police station where he was detained,” Hughes claimed.
“The questioning of Mr London continued with the further questioning about leases which did not contain the requirement to seek the written approval of NICIL before subletting of the property. During the questioning of Mr London, he was confronted by the legal officer of NICIL. The questioning of Mr London was completed for the day after four hours. A request for his admission to bail was again denied.”
According to Hughes, his client has not been accused of leasing the land below market rate and the police did not provide anything to substantiate their contention that NICIL’s failure to prevent the subletting of property was a criminal offence.

NICIL has been taking flak for the leasing of several plots of land at Peters Hall by two companies, A-Z Pharmaceuticals headed by Eddie Doolall, and Life 1 Pharms Incorporated headed by Avalon Jagnanan. These lands were leased and then flipped for a profit.
Of interest, too, is the fact that in both lease agreements, a clause was deliberately modified to state that “the lessee may divest the land, may part with possession, may assign it to a third-party interest”.
However, Guyana’s State Lands Act stipulates that whenever State lands are leased, the lease agreement must indicate that the lessee “shall not” part with lands (possession) or “shall not” assign the interest in the said agreement without the consent of the State.
It also states that in the event that there is going to be a transfer to a third party, the State reserves the right to step in and repossess the lands, reverting ownership to the State.