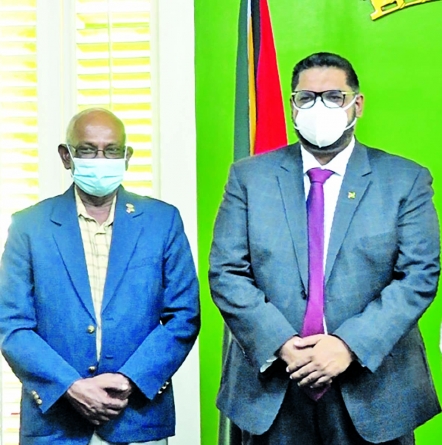 Former Local Government Minister Ganga Persaud was on Thursday sworn in to serve as Commissioner on the Public Service Commission, and has pledged to ensure that public servants act in a more professional manner.

At a ceremony at State House, he was conferred with his instruments of appointment by President Irfaan Ali. Persaud, who replaces Geeta Chandan-Edmond, will serve for three years in this capacity.
Speaking after his swearing in, the former Minister said he will work along with the Commission without turning a blind eye to issues which need intervention.

“My commitment is reflected in the oath that I took…I am known to be a team player, but not necessarily a team follower. I can assure you that the interest of every public servant within Guyana’s Public Service will be my focus, and I will do so in keeping with the team and with the Public Service Commission’s rules and the Constitution of Guyana,” he said.

Persaud acknowledged that there are a number of issues to be addressed in enhancing the functions of public servants. However, he assured that as long as their duties are carried out professionally, without any political mingle, the jobs of public servants will be secured.

“There are a lot of issues out there. I have read some in the public domain. I’ve heard some. Some of these issues are very surprising, because the guidelines, rules and procedures of the Public Service Commission are very clear. Definitely, as these matters come to the floor, the Commission, on deliberation, will seek to deliberate and pronounce…We have to continue to give that comfort to public servants that you can work irrespective of the political season, and you can work as a professional and your tenure will be assured and secured.”

The Public Service Ministry is also under organisational reconstruction to enhance its effectiveness, after it was found that the human resource is not functioning at the zenith of its capabilities.
Speaking during her first press conference on Monday, newly-appointed Public Service Minister Sonia Parag said the Ministry had been working on a low scale to get tasks and procedures completed. This was fuelled by the non-existent timeframe to process applications, vacancies and applications, thus resulting in them being done leisurely.

While recognising that changes need to be made, she signalled at reforming the public service into a professional outfit through the introduction of a code of ethics and code of conduct. This will allow for periodic assessments of public servants, to determine their level of performance.
“The Public Service Ministry is committed under my command to foster a professional public service, instilled with, and committed to, a culture of excellence by driving change and innovating, facilitating continuous professional development; implementing administrative reforms, creating conditions for conducive work environments, promoting and maintaining accountability.”
She added, “We will also do a periodic evaluation on public servants…It will allow us to be able to inform them when they’re lapsing.”