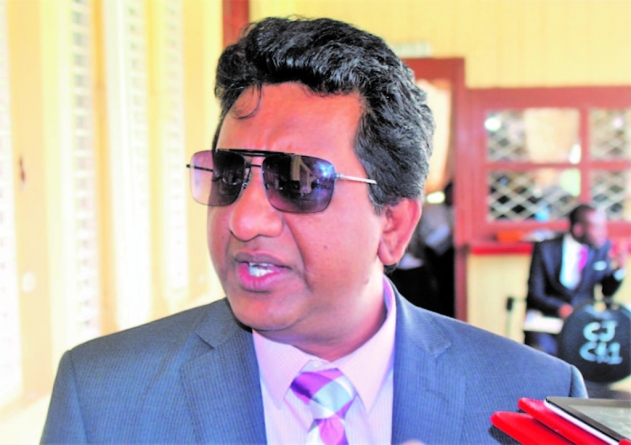 Attorney General (AG) and Minister of Legal Affairs, Anil Nandlall S.C., has said that a new prosecutorial project will significantly assist the efforts of the Support for Criminal Justice System Programme (SCJSP) by helping to promote the use of the alternative sentencing for non-violent offenders.

In a live-streamed press conference publicized via the Department of Public Information (DPI), the Attorney General gave an update on aspects of the SCJSP of which, reducing Guyana’s overcrowded prison population is a major objective.
According to the AG, the SCJSP which is funded by the Inter-American Development Bank (IDB) has begun to accelerate towards the implementation of the various components of its plans with key focus on projects to help reduce Guyana’s non-violent prison population.
In this regard, Nandlall noted that the introduction of the new initiative to have suitably qualified persons with a Bachelor of Law degree (LLB) trained as prosecutors to represent the State in criminal matters in the Magistrates’ Court is crucial.

Expounding on the need for the new initiative, Nandlall noted that in many cases, police prosecutors, who currently represent the interest of the State are not knowledgeable of the alternatives to custodial sentences available to them.
Towards this end, the AG noted that “Any person with knowledge of the Court system will tell you that in many instances, you find on one hand, the accused in a matter can hire a lawyer in the profession and on the other hand, the policeman, who is an untrained lawyer, representing the interest of the State and who himself is not properly equipped to conduct the task unfortunately given to him. So, what we are seeking to do with this initiative is bring a greater balance to the current imbalance to the scales of Justice.”

As such, he stressed that “once a properly trained prosecutor is in the Court, he will be able to advert all the avenues that the law currently provides for alternative sentencing so that we will have a vast reduction or swift reduction for custodial sentences for non-violent offenders.”
He continued, “We believe also that a properly trained prosecutor will be able to take advantage of devices that are currently available in the law for example, right now, we have plea bargaining legislation but it is highly underutilized, whereas, the Criminal Justice System can be saved months of work and millions of dollars in resources if plea bargaining arrangements can be struck obviating the need for prolonged and protracted trials.”

In addition, Nandlall said that there is also legislation that expedites Preliminary Inquiries (PIs) in the Magistrates’ Court but which are not adequately exploited.
He noted too that part of the reason for this is because the Courts don’t have prosecutors who are knowledgeable about all the facets available in criminal law.
However, Nandlall said that this will soon change as the project is taking shape.
Already, the AG said that the prosecutorial project has attracted enough qualified persons to equip each Magistrates’ Court in the country with the skills needed to ensure justice is adequately dispensed.
The AG had previously disclosed that in excess of 50 law graduates from the University of Guyana (UG) have already indicated their interest in being trained to serve as prosecutors.

The graduates, all holders of Bachelor of Laws (LLB) degrees, will have to undertake a one-year accredited prosecutorial training programme at UG, which will soon be implemented. Graduates who are selected will be hired as prosecutors in the Magistrates’ courts in collaboration with the Director of Public Prosecutions and the Guyana Police Force.
The AG said one of the goals of the initiative is to address the overcrowding of local prisons. Guyana’s prison population significantly surpasses the world’s average with a rate of 264 per 100,000 and an occupancy level of 37.5 percent. AG Nandlall attributed this to an over reliance on custodial sentences and the overuse of pretrial detention in the criminal justice system.