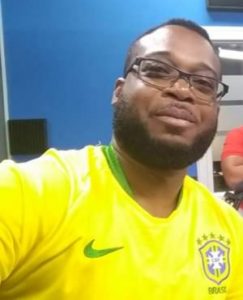 The Editor-in-Chief of the state-owned National Communications Network (NCN), Leeron Brummel was late this afternoon sent on leave, stemming from his objection to a governing coalition candidate reading the news.

Demerara Waves Online News/News-Talk Radio Guyana 103.1 FM was told that Mr. Brummel was summoned to a meeting by the NCN Chairman, Enrico Woolford, and told that he was being sent on administrative leave to facilitate an investigation.

Woolford confirmed that Brummell was sent on administrative leave to allow for a probe into an alleged incident earlier Monday. He declined to immediately provide details.

Mr. Woolford also declined to confirm whether a top government official and Brummel were in an altercation and assault.

Mr. Woolford says APNU+AFC candidate Marcey Parker will continue to read the news if that is one of her duties as an announcer-producer.

Sources say Brummel had told Woolford and others in writing that he believed from an ethical standpoint Parker should not read the news because she is a candidate for the March 2, 2020, general and regional elections. Sources say Brummel had suggested that a newsreader be assigned for newscasts on her announcing shift.

Police were called in after the government information official reported that Brummel assaulted him.

The altercation and door-slamming occurred in the NCN Newsroom in full view of several staff members, after Mr. Brummel’s internal memorandum objecting to the APNU+AFC candidate Parker reading the news, was allegedly transmitted to the government information official.

Brummel declined to discuss the issue and referred all enquiries to Woolford but not before saying “I defended myself.”

The senior government official’s operations are housed in the same building with the NCN on Homestretch Avenue.

Efforts to contact the official by telephone were futile. He did not return calls either. The official is not connected with NCN.