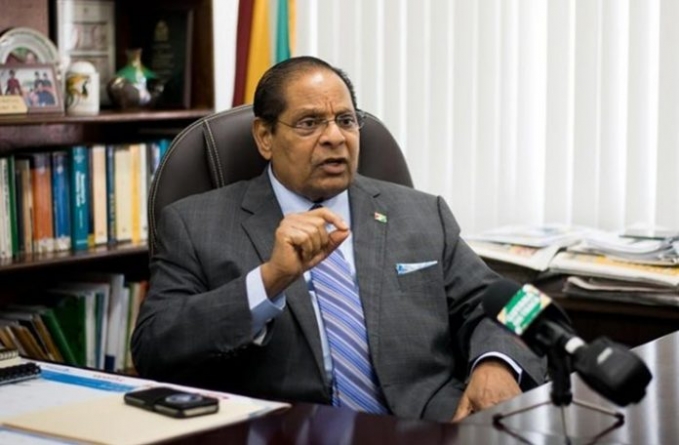 GUYANA’s unorthodox 2020 General and Regional Elections have proved, undeniably, the need for Guyana’s political leaders to have serious discussions about shared governance, constitutional reform and electoral reform, sooner rather than later.

This is a position shared by many, including Prime Minister, Moses Nagamootoo who endorsed these and other needed changes in the Sunday column, ‘My Turn’.

The Prime Minister said that the year’s elections have been stained with electoral fraud, a cycle of litigation and ethnic tensions which point to deep-seated issues which will require collective efforts to address.

To set the course, Nagamootoo said that it is crucial that President David Granger and the Leader of the Opposition, Bharrat Jagdeo, meet “urgently” to engage on the way forward.

The last time the President and Opposition leader met was almost one year ago in July 2019 to begin discussions on the selection of a new Chairman of the Guyana Elections Commission (GECOM) ahead of the March 2, 2020 elections.

The dialogue, which was later continued by party representatives of the APNU+AFC and People’s Progressive Party/Civic (PPP/C), ended successfully with the swearing in of Justice (Ret’d) Claudette Singh as Chair.

The Prime Minister believes that another meeting between the leaders of the country’s main political parties is timely and should prove beneficial in the current tense climate.

Subsequently to this meeting, he endorsed that a multi-stakeholders National Commission be established to prepare for transition to a multi-party/multi-ethnic interim national government based on 50/50 parity in Cabinet.

A national government is a government with members from more than one political party and are especially formed during a crisis.

Nagamootoo also proposed a number of electoral reforms which have proven themselves as necessary during the current elections.

He proposed that the Constitution ought to be amended to depoliticise and broaden the Elections Commission and that laws must be made to regulate campaign financing and foreign interference in the electoral process.

Such recommendations also came out of the European Union Election Observation Mission (EU EOM) report on Guyana’s elections. The Mission had observed that the bipartisan composition of the Commission resulted in excessive polarisation, affecting the Commission’s ability to function, reach common ground and make timely decisions.

Meanwhile, regarding campaign financing, the Mission noted that the legal framework did not sufficiently provide for transparency, accountability and oversight. It also said that the GECOM did not assume its oversight responsibility to monitor campaign finance.

Further to that, the Prime Minister also called for a thorough revision of the voters list to weed out the names of deceased persons, and those who are living permanently in foreign countries.

Other well-known individuals such as businessman, Stanley Ming and Attorney-at-Law, Nigel Hughes have pointed out that the decision to head into the crucial elections with a bloated Official List of Electors (OLE) and the halting of the house-to-house registration exercise was a “recipe for chaos”.

Prior to the OLE’s confirmation, GECOM Commissioners nominated by the government had argued that under no circumstance could Guyana’s population of 750,000 plus persons produce such large Voters List considering that the school-age population is around 200,000.

There were also issues regarding the presence of the dead and migrated on the list and, while efforts were made through the General Registrar’s Office (GRO) to remove some of the dead, the Court ruled that residency was not a requirement for voting in Guyana.

Even in accepting the decisions, Government-nominated Commissioners contended that with Guyana’s known history in accusations of rigged elections and calls for the recounting of votes, heading into ‘the mother of all elections’ the most credible List should have been sought.

However, the PPP/C opposed the continuation of the exercise and made light of the calls to remove the dead and migrants. Fast forward to post E-Day, Guyana has engaged in a national recount and several court battles and is yet to declare its elections results due to contention on the validity of votes cast which include the deceased and migrated.

Also, in his list of endorsed recommendations was a call for the personal data of all Guyanese nationals to be protected from unauthorised access and manipulation for electoral purposes.

The PPP/C’s 2020 elections campaign is still being viewed as highly suspicious by the governing APNU+AFC as information has been released about the party’s involvement with Cambridge Analytica, a data marketing firm that uses data to change audience behaviour. It has been exposed internationally for its practices of data harvesting from tens of millions of Facebook users — in some cases, private messages.

Another company the party is involved with includes Mercury Public Affairs — an American firm contracted by the PPP/C in March 2019 — from which representatives entering the country and were found in possession of cyber equipment according to reports.

The final endorsement by the Prime Minister was for fresh elections to be held under the aegis of the United Nations (UN) within three years.

“These are by no means novel or new ideas but I share them today with a view to stimulating a national dialogue on the way forward so that we could avoid the pitfalls that would attend zero-sum, winner-takes-all elections,” he stated.

“For too long Guyanese have been trapped in these ethnic silos in which we have found it difficult to breathe and to grow. We have to step out and away from our collective self-entrapment, and literally escape from the political labyrinth. Together we must face our many challenges and enjoy our new opportunities as an enviable rich petroleum state.”