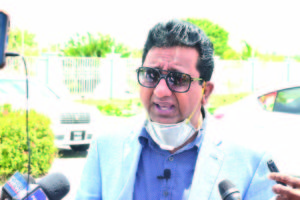 The Government was yesterday flayed by former Attorney General Anil Nandlall for its `sub judice’ attempt to influence the expected ruling on Wednesday by the Caribbean Court via advertisements placed in regional newspapers and on the social media page of PNCR General Secretary Volda Lawrence which state that the case is outside of the CCJ’s remit.

“These publications constitute a crude and vulgar attempt to prejudice the minds of the judges of the CCJ so as to influence the outcome of the case,” Nandall yesterday told Stabroek News as he pointed to a page 10 advertisement in the Trinidadian Guardian newspaper.

“It also amounts to an attempt to scandalize the Court and bring the administration of justice into disrepute by them even thinking that the Court will be, or is capable of, being so influenced. It is a gross insult to the intellect, integrity, dignity and independence of those judges and the apex Court in the Region,” he added.

There is no indication who paid for the ad but it is intended to aid the case presented by lawyers of the incumbent APNU+AFC.

The Caribbean Court of Justice will on Wednesday, at 3 pm, make a ruling on an appeal related to the March 2nd elections, brought by PPP General Secretary Bharrat Jagdeo and PPP/C presidential candidate Irfaan Ali.

Jagdeo and Ali are appealing a Guyana Court of Appeal (CoA) decision which sought to insert the word “valid” into the meaning of provisions of the constitution addressing the election of a President. The Court of Appeal ruling also sought to draw a nexus between Order 60 dealing with the recount of votes from the March 2nd general elections and the word valid.

On Wednesday when it hands down its decision, the CCJ panel, headed by Justice Adrian Saunders, will first have to rule on whether it has jurisdiction in this matter. Counsel for APNU+AFC has argued that the CCJ has no jurisdiction, as Article 177 gave exclusive jurisdiction to Guyana’s Court of Appeal. That was the issue keenly contested when arguments were put to the court last week Wednesday.

The CCJ decision could be a key moment in bringing a conclusion to the elections drama that has gripped this country since March 2nd.

‘Sub judice’
Nandall said that both government and the Minister of Public Health Lawrence, who also has the notice on her social media Facebook page, should know that they are breaking the law.

“The sub judice principle, for example, prohibits parties and their lawyers in a pending litigation, from publicly discussing the issues arising in that litigation in a manner than can prejudice or tend to prejudice, the outcome of that litigation,” he said.

“For this reason, the lawyers and the parties are confined by the law to make their legal arguments, submissions of laws and legal authorities in support thereof to the court itself, in accordance with directions given by the court. They are not permitted to make extra-judicial presentations by publications and advertisements in the media,” he added.

The full-page advertisement states at its heading that “The Constitution of the Co-operative Republic of Guyana Must Be Respected”.

Quoting excerpts of Article 177(4) of the Guyana constitution, it says “Article 177(14) provides: The Court of Appeal shall have exclusive jurisdiction to hear and determine any question as to the validity of an election of a President in so far as that question depends upon the qualification of any person for election or the interpretation of the Constitution; and any decision of that Court under this paragraph shall be final.”

Extracts were also taken from the Act establishing the CCJ.  It pointed to Article XXV(5) of the agreement.

“Nothing in this Article shall apply to matters in relation to which the decision of the Court of Appeal of a Contracting Party is, at the time of the entry into force of the Agreement pursuant to the Constitution or any other law of that Party, declared to be final,” it reads.

“The Caribbean Court of Justice Act No 16 of 2004 (Guyana) At Section 4(s) Provides: Nothing in this Act shall confer jurisdiction on the Court to hear matters in relation to any decision of the Court of Appeal which at the time of entry into force of this Act was declared to be final by any law, ” it adds.

As it opined that the CCJ should refuse the current appeal before it, the advertisement references the June 22 decision of the Court of Appeal of Guyana where two of three judges ruled that the court has jurisdiction to hear the current matter. “On June 22nd 2020, the Court of Appeal of Guyana ordered that the words `more votes are cast’ in Article 177(2) (b) of the Constitution of Guyana be interpreted to mean `more valid votes are cast in relation to the election held on the 2nd March 2020,’ the ad states.

“Article 177(4) pf the Constitution of Guyana in the Caribbean Court of Justice Act have UNDENIABLY OUSTED THE JURISDICTION of the Caribbean Court of Justice (CCJ) from adjudicating on any decision made by the Court of Appeal under that article, and, as such, the application by the People’s Progressive Party/Civic (PPP/C) for special leave to appeal the Court of Appeal’ decision OUGHT To BE REFUSED”, it added.

‘Trying’
As he condemned the acts, Nandall said that after the hearing of legal submissions presented to the CCJ last Wednesday and more significantly, after hearing the nature and purport of the questions posed by the judges to the attorneys-at-law, he believes that the APNU+AFC plummeted into a high mode of “desperation”.

“They have placed advertisements in newspapers in Trinidad and Tobago, Barbados and perhaps elsewhere, trying to argue that the CCJ has no jurisdiction to hear the case and that the Guyana Court of Appeal’s decision on the matter is final and not appealable,” he said.

“Over centuries, multiple principles of law and numerous tenets of fundamental justice have evolved to protect the administration of justice from such contamination,” he said, stressing the sub judice requirements.

“Concomitantly, the media has a responsibility not to entertain these publications. Many newspaper journalists around the world have been dragged before courts for contempt because of similar publications. The arms of the law in the Law of Contempt are immeasurable in length and will extend as far as possible to protect the administration of justice from being polluted,” he added.

He said that he was not surprised by the actions of the incumbent government and that it would not be the first time they disregarded the law. “One cannot be surprised that APNU+AFC will descend to such a level. They have repeatedly demonstrated their own contempt for the rule of law and the administration of justice; they have repeatedly trampled upon our constitution and by their conduct in respect of these elections alone, they have demonstrated their utter disregard for every canon of democracy and have shown their uncanny affinity for fraud and perversities of every type,” Nandall said.