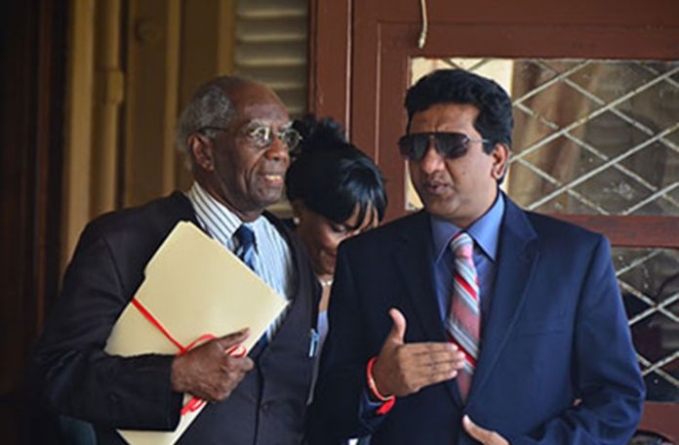 Attorney Anil Nandlall today condemned a statement made yesterday by the Chair of the PNCR Volda Lawrence for APNU+AFC supporters to assemble outside of polling stations on elections day at the close of poll and to follow ballot boxes.

As the elections campaign accelerates, I have observed a most dangerous signal. Almost every political leader of APNU+AFC, speaking on the political platform, has been urging their supporters to assemble in large numbers at polling places at the close of polls “to protect their ballots”. The Chairperson of the PNCR, Volda Lawrence, went even further. At a public meeting at Kitty, Georgetown, on Sunday evening, Lawrence is reported, in the press as telling supporters that they must follow the ballot box all the way to the container and ensure that it is securely locked.

On behalf of the PPP/C, I have worked integrally in the electoral machinery in every national and regional elections since 1997, as an Assistant Elections Agent for Region 4. From this vantage point, I can speak from personal knowledge of the dangers which underpin such political rhetoric. The unfortunate reality is that violence and riotous behaviour are closely connected to elections in this country. Invariably, they erupt from the very crowds which the PNC has historically caused to assemble at polling stations at the close of polls.

In 2015, even senior APNU leaders could not have controlled such an assembled crowd that unleashed violence on the PPP/C’s candidates and activists in Sophia, which led to the burning of Joe Hamilton’s car and a polling station, erupting in flames and burning to the ground, which was someone’s private residence in Sophia, Greater Georgetown.

Similarly, at a primary school, located at Better Hope South, East Coast Demerara, which was used as a polling place, an assembly of PNC supporters quickly descended into a riotous mode and brutally assaulted my driver whom I had instructed to pick up PPP/C polling agents and Statements of Poll from that polling place. There are dozens of similar incidents which have occurred throughout the country, on elections day, to which I can make reference, but I think these two shall suffice for now.

I emphasize that these atrocities occurred without PNC/APNU politicians calling publicly for their supporters to assemble at these places of polls when darkness descends. No doubt the instructions were then tacitly but centrally directed. I will be bold to speculate, that this time around, it is an agreed elections strategy and I dare say, that it is a recipe for disastrous consequences. Just imagine if the PPP/C were to be equally irresponsible and provocative and call upon its supporters to also assemble at polling places at the close of poll alongside the coalition supporters.

The reality is that GECOM and the security forces of our country are responsible for ensuring the safety of the ballots. As far as I am aware, they have never shirked nor abdicated this responsibility. Therefore, this ominous political rallying call is wholly unnecessary.

I call upon the international community, the elections observer teams, all stakeholders and every responsible and freedom loving Guyanese to condemn, in the strongest possible terms, this most ominous development. Our electoral history is replete with examples, to establish beyond a shadow of doubt, that nothing good can come out of it.