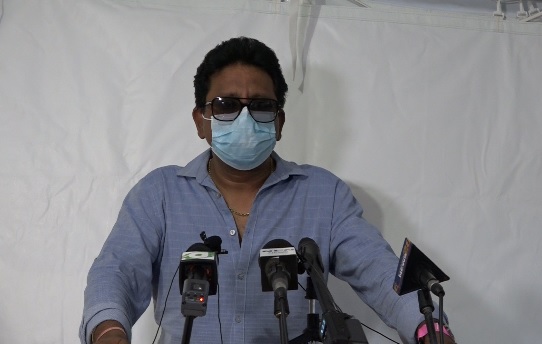 Attorney General Anil Nandlall today told the High Court that the appointment of Minister of Tourism, Industry and Commerce Oneidge Walrond as a Member of Parliament had been unconstitutional and that the matter will remedied by having her sworn-in again.

Walrond had first taken the oath as a Minister on August 5th and then as an MP on September 1st.  Both appointments transgressed the law as she was still a dual citizen. Both she and the government had up to that point argued that no wrong had been committed.

The opposition APNU+AFC on November 18  filed an action in the High Court against Walrond seeking a declaration that she had been illegally sworn in as a MP.

In his application filed against Walrond, the Attorney General and the Speaker of the National Assembly, Opposition Chief Whip Christopher Jones was asking the court to grant among other things, declarations not only that Walrond was an illegal member of the 12th Parliament but that she was also unlawfully appointed a Minister of government.

Walrond had publicly stated that she had renounced her United States (US) citizenship since August 27th before taking the oath of office as an MP on September 1st and had subsequently received the Certificate of Loss of Nationality.

Her certificate of renunciation which was made public, however, showed otherwise. Records released by Parliament Office showed that Walrond was still a dual citizen at the time she was sworn-in as an MP.

The matter came up before Chief Justice Roxane George this morning who granted a declaration that Walrond was not a “lawful member of the National Assembly of the 12th Parliament”.

In conformity with our Government’s commitment to respect and uphold the Constitution of the Co-operative Republic of Guyana and the rule of law, and to avoid unnecessary wastage of judicial time, resources and public funds, the Attorney General filed an Affidavit on behalf of  Walrond, in which Ms. Walrond deposed that her appointment as a “Technocrat Minister” predated her application for relinquishment of the nationality of the United States of America and further that she was properly appointed by His Excellency, President Dr. Mohammed Irfaan Ali, with effect from the 1st day of December 2020.

At the hearing, these facts were disclosed to the Court by the Attorney General, who emphasized that unlike in the recent past, this Government took expeditious remedial action in correcting an error of law that was made as soon was reasonably practicable without the need for protracted, time consuming and unnecessary litigation.

Upon inquiry, the Attorney General informed the Court that the legality all actions and or decisions of Minister Waldron prior to the 1st day of December 2020, would be saved and cured by the De Facto Doctrine and the Doctrine of Necessity – a proposition with which the Court concurred.

The Government’s position in the case was also informed by the fact that Minister Walrond’s undivided attention and energy are required in the discharge of her ministerial responsibilities as part of the Government’s agenda of improving the lives of the citizenry and working towards creating a better Guyana for all; keeping this case languishing in the Court would result in an unnecessary cloud and burden over Minister Waldron.

Minister Walrond will be sworn at the next sitting of the National Assembly, as an unelected Member thereof.