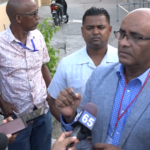 Controversy emerged over the verification of the Statements of Polls for Region Four (Demerara-Mahaica), with a mysterious spreadsheet being used by Guyana Elections Commission (GECOM), instead of the SOPs, during the tabulation process. This mysterious spreadsheet saw the APNU/AFC Coalition getting more votes than voters in 17 of 23 areas.

Opposition Leader, Bharrat Jagdeo, explained that the laws say for the tabulation to be verified using the SoPs but there was an attempt to use a spreadsheet, which contained figures that differed from most parties and even the observers.
“They came with a spreadsheet and started to call out boxes in the spreadsheet. In 23 places that they called out, 17 of those they had APNU with at least a hundred votes more than what were on the Statements of Polls. So, everyone objected – the observers, the political parties – every one objected to this. Then (Chief Elections Officer Keith) Lowenfield came down himself and he did a random sample. He took three of them and he found that in each of these three cases, you had at least 100 votes more for APNU that is on the Statement of Polls,” Jagdeo noted.
He told reporters outside the Guyana Elections Commission (GECOM) Operations Centre located at High and Hadfield Streets (in Ashmin’s Building), which also houses the Region Four Command Centre, that they do not know where the spreadsheet/list was generated from.
According to the Opposition Leader, it was first used around 13:00h on Wednesday when the verification process had resumed after Region Four Returning Officer, Clairmont Mingo, had collapsed and was rushed to the GPHC, bring a halt to the process.
Jagdeo suspected that attempts were made to have the RO use the false spreadsheet but he, instead, started the verification process on Tuesday night with the SoP as stipulated in the law.
He went onto disclose that the SoPs for 310 ballot boxes in Georgetown were verified on Tuesday with just about 70 more boxes remaining from Georgetown to verify before moving to the East Bank and East Coast of Demerara. But when the verification process, resumed on Wednesday morning, they started with the East Bank Demerara tabulation without completing Georgetown.
“Suddenly, they came, not with the SoPs, they came with a list and started calling out numbers from this list and every list had discrepancies. So the observers objected and started pointing this out and the PPP and the other parties…,” the Opposition Leader noted.
Asked whether efforts were taken to ascertain where the document generated from, Jagdeo posited that this will be looked into later, as the focus now is getting verified results.
“The people of this country are waiting for verified results. They’ve had declaration in all the regions using that very process – Statements of Polls. Here in Region Four, they want to use a list generated by someone so now we have to ensure that the law is followed. The APNU agents seems to be the only ones with the list that the GECOM is using, nobody else has it, no observers. So we have to get back to the process of verifying all the statements of poll in Region 4 to see that they’re accurate and then have the results declare for Region Four,” he contended
This newspaper was also told that GECOM has refused to verify SOPSs for 67 ballot boxes.

No compromise
According to Jagdeo, who is also the General Secretary of the People’s Progressive Party/Civic (PPP/C), the party will not compromise the process and is willing to wait until verified results are available.
“The country has to understand that we have to have verified results, all the people – APNU supporters as well as PPP supporters, they want verified results. And if it takes two more days to get that done, then that’s fine with us [rather] than you announce unverified results. The whole country has had their declarations, almost every region, and they’re stalling in Region Four,” he asserted.
Nevertheless, sometime after Jagdeo’s update, it was indicated that the issue has been resolved and a consensus was arrived at to continue verification of the Region Four ballots using the SoPs. At the time when the process was stalled, there some 411 ballot boxes that were verified with SoPs and more than 300 remaining.

The Chief Elections Officer subsequently told reporters that there are about 192 SoPs to be verified for the East Bank and another 170 plus for the East Coast of Demerara. Georgetown was completed at that time, he noted.
“At this time, the whole posture is to ensure there is transparency in the process and plead with citizens to remain calm to ensure that we have the correct results that will be to the satisfaction of all Guyanese…,” Lowenfield asserted.
Many of the international observer missions as well as locally accredited diplomats were at the GECOM Centre during discussions to resolve the matter. They indicated to reporters that the important was that the issue was resolved and the verification process will resumed, as prescribed by law, while adding too that it was important to have accuracy over expediency.
The same sentiment was expressed by domestic observers.
It was further indicated by stakeholders that the verification process will continue throughout the night until Region Four is completed.

More controversy
On Tuesday evening, at about 21:00h, Mingo informed the parties and GECOM that he was tired and abruptly halted the verification process. The process was again halted about three hours into the resumption of the verification process on Wednesday evening, controversy rose again after a suggestion was made to suspend the activity.
Two clerks, one of whom is heavily pregnant, under RO Mingo were placed in charge of the verification process and had complained about tiredness sometime after 20:00h.
But stakeholders, including many of the various parties’ representatives, objected to suspension of the verification process resulting in the CEO making arrangements for at least two Deputy ROs to go in to continue the verification.
Despite this, however, many came out lashing out at GECOM for not having a contingency plan in place to deal with situations like this. It was pointed out that there are about 80 DROs in Region Four but no arrangements were made to have a rotation system amongst them to ensure that the process continue to the end, as was committed to earlier by the CEO.
Nevertheless, with the exception of party agents from the APNU/AFC who had left the Centre, stakeholders from the political parties as well as observers, both local and international, remained there in hopes that the process would resume and be completed during the course of the night in order to ensure that the Region Four results are declared at soonest.
Up to press time, that was the only region remaining with the other nine regions having already declared their results. However only 36 of the EBD SOPs were verified. The introduction of the mysterious data has since been deemed as an attempt to rig the elections.

Disruptive crowd
Meanwhile, earlier on Wednesday night while the mysterious spreadsheet issue was being sorted out inside the GECOM Operations Centre, persons started to gather outside the building. Though police ranks were present, no attempts were made to cordon off the area until the crowd, mostly of Coalition supporters, grew bigger and somewhat disruptive.
Member of the A New and United Guyana (ANUG), Timothy Jonas, subsequently urged the APNU/AFC leaders to address the situation.
Almost simultaneous, Leader of the APNU – the majority party in the Coalition – David Granger, sought to address supporters who had been camped outside the party’s Command Centre on Lamaha Street, “celebrating” since Tuesday.
Granger indicated that the verification process was still ongoing and that they needed to wait until GECOM officially announces the results from Monday’s General and Regional elections.