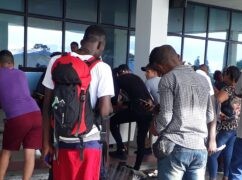 This is according to Home Affairs Minister, Robeson Benn, who told media operatives on Monday that these persons are still unaccounted for and evidence suggests that they are not in Guyana. Information has suggested that they used the country as a transit point to enter other countries.
“There are 33,000 persons of Haitian citizenship who have come to Guyana over the last three years and 2020 to date. Those who arrive are missing. We know that they are not in Guyana. We know many reports of them going over the Corentyne River, perhaps to French Guiana. We know that many of them are said to be going to Brazil. We believe that there are strong elements of human trafficking and people smuggling in relation to this matter,” the Minister shared.

He went on to say that since taking office a few months ago, there were requests for persons of Haitian nationality to enter Guyana using charter flights. However, these were denied but these persons have found other alternatives.
“I had refused the landing of a charter flight some time ago surprisingly from the Dominica Republic and Haiti, which was consisting of all Haitians. It appears that after that refusal, there have been attempts to come through Barbados on smaller planes and through Caribbean Airlines to continue what we view as trafficking.”

Minister Benn went on to say among the list of persons are seven children, and information suggests that they are not related to the persons they were travelling with. However, an investigation is in full swing. Government is looking at measures which can be put in place, including the issuance of visas to curb these discrepancies.
“It does not appear that any of these children have any relation to the persons who they were travelling with. The investigations are underway and we anticipate that we will have these people return to their homes. We will have to institute a system with visas being issued before persons from any of those countries can come to Guyana,” Benn shared.

Up to August 2019, information showed that 8476 Haitian nationals arrived in the country, but the data showed that only 1170 have left, leaving more than 7000 immigrants unaccounted for.
While the issue of foreign nationals overstaying their time in the country is not a new one, the numbers have significantly increased since 2015. In 2013, 188 Haitians arrived in Guyana with 99 departures; and in 2014, 227 arrived and 113 departed

The legislative adjustment to Schedule II of the Immigration Act, Cap 14:02 was amended to include Haiti as a beneficiary to the Caribbean Single Market and Economy (CSME), which facilitates free movement within the region and automatic entry and stay of six months in Caricom countries.
Prior to the amendment, the Act had facilitated the six-month automatic stay to other Caricom member states including Antigua and Barbuda, Barbados, The Bahamas, Montserrat, Grenada, Jamaica, Suriname, Trinidad and Tobago with the exception of Haiti, whose nationals had required a visa and were only allowed to stay for up to 90 days or three months.
Since then, Haitians no longer need a visa to travel to Guyana and are afforded the same treatment and welcome that other Caricom nationals have enjoyed.