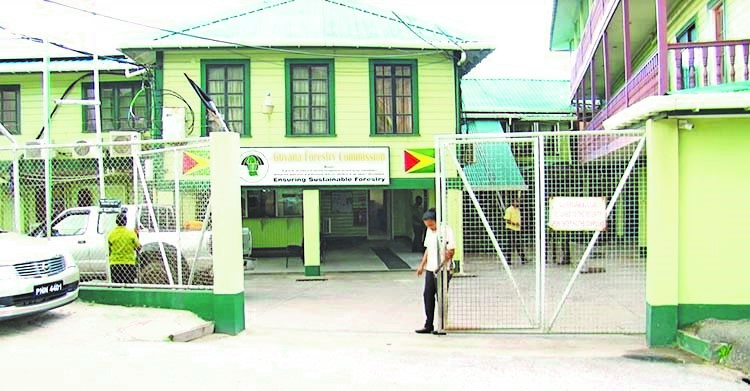 The Guyana Forestry Commission (GFC) has indicated that it will commence payment of the 2018 bonus due to staff after it was withheld by the previous A Partnership for National Unity/Alliance for Change (APNU/AFC) Administration.
According to the Natural Resources Ministry, the payment of the bonus is as a result of the first engagement with Minister Vickram Bharrat back in August when he took office.

Over the past four years, the Guyana Forestry Commission under the previous Administration became bankrupt and unable to pay basic salaries and other operational expenses. This was further complicated by poor decisions of the previous Board of Directors which placed additional financial burdens on the administrative and management operations of the Commission.
A statement from the GFC on Tuesday said that the mismanagement not only affected staff of the GFC, but resulted in the rapid deterioration of logging roads which were maintained by large scale investors who exited the industry due to bad policies under the David Granger-led Administration.

It added that with the oversight of the Natural Resources Minister and the management team of the GFC, efforts are being made for the Commission to become financially viable and self-sustaining in the short, medium and long term. As such, the Commission’s short-term strategy to increase revenue and minimise expenditure is proving successful at improving its financial status and making the GFC once again self- sustainable.

“Hence, the current Government is committed to paying this outstanding bonus to all eligible staff before the end of 2020,” the Government related in a previous statement.
After taking office, Parliamentary Affairs and Governance Minister Gail Teixeira confirmed that the GFC is in a state of bankruptcy. The Minister related that when the People’s Progressive Party/Civic (PPP/C) had demitted office in 2015, the Commission had over $4 billion in its coffers. Now, the agency does not even have sufficient funds to pay salaries. This is topped with high debts.

During Bharrat’s first engagement at the Ministry in August, he was informed that the Commission was unable to pay salaries for July to its staff and more so, millions of dollars were owed to utility companies. In response, Bharrat had suggested major restructuring at the various agencies to ensure that they function in a more effective manner.
Guyana has an area of 214,970 km2, of which nearly seventy-five per cent is covered with natural vegetation. Of this area, approximately four-fifths is classified as State Forests under the jurisdiction of the GFC.

The deficit balance came as a surprise, given that the 2019 Mid-Year Report had shown that the sector was one of the few economic success stories. The report had said that the forestry subsector was estimated to have grown at the half-year.
This growth had encompassed the production of timber, including logs, round wood, primary lumber, split wood and fuelwood. According to the report, the production of these commodities rose by 7.8 per cent above the level achieved at the end of June 2018.

“This pushed growth in the sector to 8.5 per cent in the first half of 2019. The improvements to interior roads in the latter half of 2018 saw community loggers, particularly in Region 10, realising higher production levels in the first quarter of 2019. Production continued to surge, driven by small-scale concessions and community forestry operators,” the report had indicated.

“At the end of the first half, log production grew by 6.8 per cent, mainly on account of the increased extraction of greenheart logs to meet local demand. On the other hand, weaker international demand for round wood resulted in a contraction of this category in the second quarter, which resulted in a 2.6 per cent decline relative to the previous half-year,” the report added.
According to the document, primary lumber producers recorded gains of 32.4 per cent in the first half, which was attributed to them capitalising on local demand for construction. The report also projected a positive outlook for the remainder of the year for the sector.