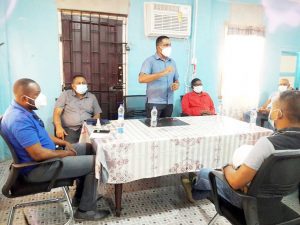 Some Region 6 Neighbourhood Democratic Council’s (NDC’s) were on Saturday visited by the Minister of Local Government and Regional Development, Nigel Dharamlall who addressed several things his ministry is looking at to improve the services delivered at the regional and community levels. The NDC’s visited by the Minister and team included Crabwood Creek, 52/74, Good Hope/51 and Black Bush Polder. At the meetings with councillors, chairmen and overseers of the respective NDC’s, the Minister made it clear that the manner in which the local bodies operate will have to change in order to foster a better relationship with the people living within communities that fall under the NDC’s.

He mentioned that in the past, the region administration held the sole responsibility for the tendering for the subvention for the NDC’s and with that process, the Regional Executive Officers determined how the money was spent in the different communities across the country at the local government level; this process, he said, was shrouded with questions since the people cannot determine whether they are getting the value deserved.

In that regard, he proposed and encouraged ways and means to “build confidence in the system”. He added that in terms of procurement for the NDC’s a councillor from the NDC’s be present and sit in during the evaluation process when administering contracts, as evaluators or observers, so that they may have extensive knowledge on what is being done.

Dharamlall said that, during the previous administration, many projects done within the region were awarded to contractors who were not from Berbice but rather on many occasions, either from Georgetown or Linden; this, the Minister underscored, will have to stop since he believes there are many skilful people within the region that can execute works at the village level.

“I don’t think it is right for someone from some other area come here to build a fence, so the regional engineers have to start getting on these projects. We promised 50,000 jobs and we must make sure the people in the villages get the opportunity to be employed. We also must make sure the village economies start reviving once again and we can’t do it with one set of people, everyone must get the opportunity”, he said. Continuing on the issue of the path of development at the NDC level, Dharamlall spoke of community enhancement and stated that the community enhancement workers currently employed at the NDC’s will be increased so that jobs can be provided, and more work can be done.

“It is a way of integrating more resources into your economy. Slowly we will have to use innovative ways of rebuilding the village economy. I think in every NDC area, moving forward, we have some new programs in the ministry that we have, including a program called the Sustainable Livelihood Entrepreneurial Development Program (SLED) and we would like to see small businesses get support in restocking, retooling so that you can come to get a grant and your business will turn over. Or you can come to do small projects in the community to build sustainability in villages”, he said. He proposed having community grants provided as part of the procurement processes “so that communities themselves can do small projects within the communities.”

Further, Dharamlall committed that under his tenure as the Minister of Local Government, he will not sign on to anything unless “I can see evidence of the NDC and the RDC in villages meeting with the people to determine what projects have to be done”. He said he expects from now on “every contract that has to be done in the NDC whether from central ministry or RDC will have to be published at the NDC, not the contract but the bill of quantities. So, when a road must be built you must be our eyes and ears.” He called on the NDC’s to have monthly financial statements visible on the NDC buildings so that the people can “see the finances”. He also recommitted to one of the promises made during the 2020 election campaign trail that there will be no increase in rates and taxes for the next five years but implored the overseers to come up with a plan to have house to house visits and meet the people to find out how they will pay their rates and taxes.

Some other proposals made by the Minister included having pensioners uplift their pensions at the NDC’s to make it more accessible and easier for them, the reforming of the solid waste management with possibly having a dumping site at every NDC, better care and control of community facilities so that the youths can benefit to a greater degree, making things easier for disabled persons with NDC officials visiting their homes to take the service to them and better conduct of workers when dealing with the people.

Additionally, councillors could ask questions and provide suggestions.
Visits were also paid to other NDC’s within the region by the Minister within Local Government Anand Persaud, with both ministers having visited the Rose Hall Town Council and the Corriverton Town Council yesterday. The initiative continues today with Dharamlall expected to visit New Amsterdam on Wednesday.