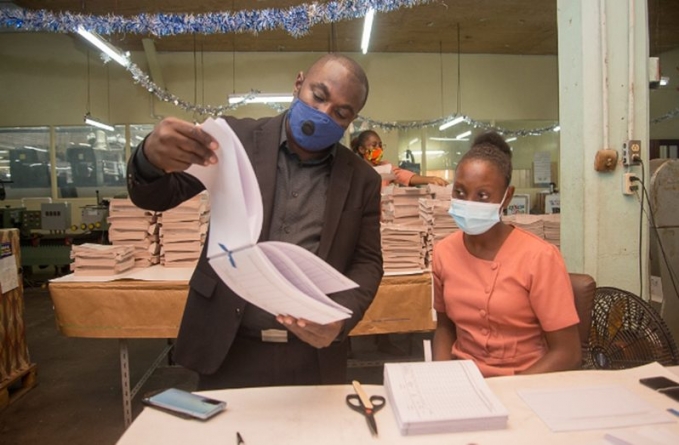 MINISTER within the Office of the Prime Minister, Kwame McCoy, on Thursday, charged the Board of the Guyana National Printers Limited (GNPL) to embrace modern techniques to execute its mandate.

The GNPL’s Board is chaired by Dr. Dexter Phillips, Chief Executive Officer (CEO) of School of the Nations. The other directors are Mark Ramotar, Molly Hassan, Edward Layne, Dion Young, Nekeisha Persaud and Sherel Isaacs.

During discussions there he advised the entity to transition to modern methods to optimise its output.
“I think it is absolutely important, in a business like this, that we examine the modern type of techniques used,” Minister McCoy said.
Further, he expressed confidence in the aptitude of the GNPL’s staff and in the company’s success. To this end, the minister encouraged the Board to plan and execute its mandate with integrity.

“We must be accountable and transparent at all times and not just by the mere use of the words of ‘accountability’ and ‘transparency’, but by our actions at every level in terms of how the company’s business is done,” he said.

Minister McCoy underscored that those principles should be seen through the actions of the Board in the GNPL’s daily operations.
Meanwhile, he lauded GNPL’s chairman as an exemplary businessman, who, along with the Board, will contribute to the growth and success of the company.
Minister McCoy and the Board of Directors were then taken on a guided tour of the facility to get a first-hand look at its operations.
The GNPL has been conducting business since 1939.