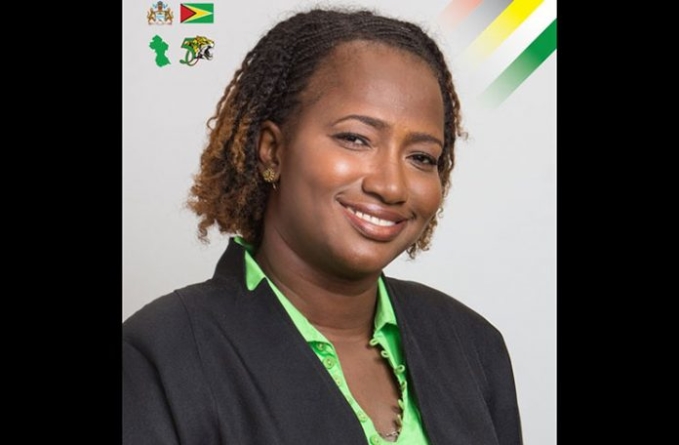 Minister within the Ministry of Communities with responsibility for Housing, Annette Ferguson, has filed a $10 million-dollar lawsuit against the Guyana Times and its editors for libel over an article published in the daily newspaper in December 2019.

The application was filed by Minister Ferguson’s attorneys Lyndon Amsterdam and Latoya Roberts, and listed the respondents and defendants as the privately owned Guyana Times Inc., its Editors Tusika Martin and Dwijendra Rooplall.

In a statement of claim, Minster Ferguson is claiming damages in excess of $10 million for libel committed by the three respondents in the publication of an article in the Guyana Times newspaper dated Wednesday, December 11, 2019, at page 13 under the heading: ‘OPPOSITION CALLS OUT MINISTER FOR LYING ABOUT HOUSE LOTS ALLOCATION’ and subheading ‘as multimillion-dollar house goes up on large plot of land.’

The minister is also seeking an injunction restraining the respondents from further publishing, disseminating and circulating to the public by newsprint and/or electronically on the World Wide Web any similar words as those posted on Wednesday, December 11, 2019, whereby they published or caused to be published the following words:

iii. “Ferguson insisted in July she only received a “regular lot” of ¼ acre or equivalent to 10,000 square feet; however, the photos of the minister’s residence suggested otherwise, with vast yard space on the massive plot.”
The minister is also asking the court to grant an order that the three respondents publish in the Guyana Times newspaper a retraction and an apology to her retracting the false statements imputing her character and reputation.
In her court documents, Minister Ferguson stated that on March 8, 2014, she applied to the Central Housing and Planning Authority for a piece of land and after her interview, she was told that she was eligible for a middle-income house lot.
Eventually, she was allocated a parcel of land in Eccles, East Bank Demerara, and paid the sum of $900,000.00 for the said house lot, which she received the title for Parcel 842, Block: I, Zone: E.B.D, Plantation Eccles and held under Certificate of Title No. 2016/3410-H.
In 2015, Ferguson stated that with the aid of her husband, she began the construction of a four-bedroom, two-storeyed concrete house with the money they had saved from my various sources of income along with her husband.

Nevertheless, she subsequently applied to Republic Bank (Guyana) Limited for a mortgage to complete the construction of the house on the land and was granted a mortgage of $20 million. However, the building is still under construction.

“I see they are busy sharing out letters, letters of allocation for house lots, they have not put in any infrastructure.

“I see Ferguson, the one who took three lots on the East Bank and wouldn’t say a word about it.

” The corrupt Ferguson, I am calling her out on this, she can sue me on this if she wants to.”

Minster Ferguson in her court document, said that “After I became aware of the press conference held by Mr. Bharrat Jagdeo and what he said about me, I held a press conference at my office on the 10th December, 2019 and invited members of the media and provided the evidence that I only have one house lot by producing my Title for Parcel 842.”

However, Ferguson claimed that on December 11, 2019, she observed the article in question in the Guyana Times newspaper.

“Although the article quoted extracts from a press conference I held at my office, in which I refuted claims made by Opposition Leader Bharrat Jagdeo and produced the Title for the Parcel of land I own, yet the tenor and language in the article was written to portray me as a liar and dishonest person,” the minister said in her document.

Additionally, the minister is contesting that the contents and tenor of the article also insinuated that as a minister in government, she acquired unexplained wealth and wealth by dishonest means when the defendants published the words “This also led to questions about her meteoric rise in wealth in just a couple of years as a minister” in the newspaper.

She also claimed that the contents of the article were deliberately written and circulated as aforesaid by the newspaper to tarnish her reputation as a minister of government and cause right-thinking persons to think that she is engaged in corrupt practices and is also a dishonest person.

Also, the newspaper attempted to bolster and support the article with a picture that tried to show that the minister owned more than one parcel of land, which is false.

“That, I believe that the newspaper produced by the first-named defendant has an agenda to support the views of the members of the opposition People’s Progressive Party with a clear plan to portray myself and other government officials as being corrupt and dishonest so as to influence the views of members of the Guyanese population to not vote for ruling a Partnership for National Unity (APNU) Government in the upcoming General Elections to be held sometime in 2020,” Minster Ferguson said.

The minister is citing that the actions of the defendants caused her to suffer irreparable harm, distress, and humiliation and caused right-thinking persons to believe that she is corrupt, dishonest, and untrustworthy and a person not fit to hold the office of a minister of the government.

A similar lawsuit was filed against the Guyana Times Inc. and its Editor-in-Chief Tusika Martin by Director of the Guyana Power and Light (GPL), Kirk Hollingsworth who is claiming damages in excess of $50M for libel.

In that statement of claim, Hollingsworth, through his attorneys, stated that Martin and the Guyana Times on November 11, 2019 published or caused to be published, an article titled, “Over 3000 acres of prime land allocated to GPL Director,” in which Hollingsworth was portrayed as having been awarded over 3000 acres of prime property located on the East Bank of Demerara, as a result of a seemingly corrupt and clandestine transaction.

Another $50M is being claimed by Hollingsworth on the basis that the article was published on Guyana Time’s online platform. In this case he is also seeking a mandatory injunction compelling both Martin and the Guyana Times to permanently remove the defamatory article from the Guyana Times newspaper edition of the November 11, 2019, available at https://www.guyanatimesgy.com.

In December, a High Court awarded judgement in default against Guyana Times Inc and Tusika Martin in relation to a $200M lawsuit levelled against them by Managing-Director of Ground Structure Engineering Consultants (GSEC) and his wife Ndibi Schwiers for defamation of character.

The newspaper had published an article based on Jagdeo’s claims, that the couple had obtained the said lands by immoral, improper, illegal and criminal means.