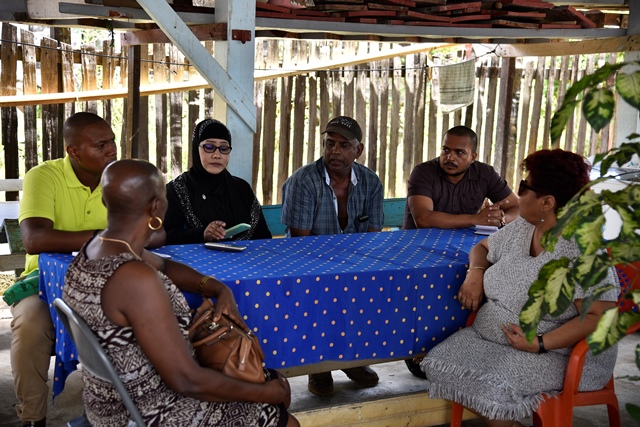 MINISTER of Social Protection Amna Ally urged Guyanese to live as one despite our differences as she paid a visit to the home of the Azeez family in Bush Lot, who had their butchery torched Friday evening by unknown persons.

“We must be our brother’s keeper; this is not the time for hate. So, I call on all the people of Region 5- I’m a daughter of this Region. I don’t want to see the destruction of this Region,” Minister Ally pleaded, according to a press release from the Department of Public Information (DPI).

It said that a visibly shaken Mr. Azeez was reassured by the Social Protection Minister that his business will be restored with the help of Good Samaritans who were moved to assist after learning of the unfortunate incident.

Minister Ally stated, “Your party, the People’s National Congress Reform will build back your stand immediately.”

The businessman was asked to provide an estimate of his losses, the release stated.
Acknowledging that the tragic circumstances were traumatizing for the family, Minister Ally called for unity among Guyanese, particularly those in Region 5 where there have been instances of unrest, fueled by the fear-mongering rhetoric of the main Opposition party.
“Keep calm, keep the peace and continue to promote peace,” the Social Protection Minister urged.

Earlier Saturday President David Granger denounced the acts of violence perpetrated in Region 5 and expressed his sympathy to all affected citizens, inclusive of the children and police officers that were attacked by violent protesters after the March 2, 2020 elections.
President Granger advised, citizens “to respect the rule of law” while calling for the perpetrators to be brought to justice.