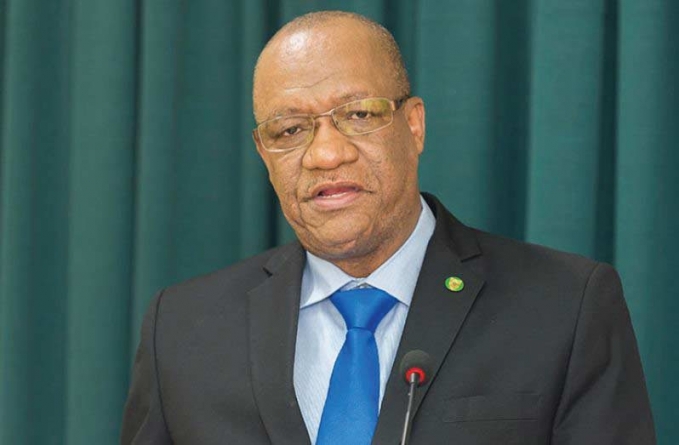 Although local and international stakeholders condemned the actions of District Four Returning Officer Clairmont Mingo to blatantly tamper with the results of the March 2 General and Regional Elections, APNU/AFC’s General Secretary Joseph Harmon has labelled an ongoing probe into the matter as “nonsensical”.

“The Police know, and so does Mr (Attorney General Anil) Nandlall, that the actions of the elections officers…are provided for under the law, and you cannot go and say that you are mounting any enquiry in all of that. It’s nonsensical,” Harmon said during a recent programme aired on the APNU/AFC’s Facebook page.

The Coalition’s strongman posited that “all of this harassment” that is taking place against Mingo, other senior officials at the Guyana Elections Commission (GECOM), and former Government Minister Volda Lawrence, “In my view they are all unlawful, all of them”.
Attorney-at-law and member of the PPP/C, Charles Ramson, had filed private criminal charges against Mingo and Lawrence on March 13. Those charges are in relation to fraudulent elections’ declarations for Region Four.

Mere days after the Director of Public Prosecutions (DPP) had ordered the Guyana Police Force to investigate reports of electoral fraud, Mingo was on Tuesday arrested and was interrogated in relation to allegations levied against him. In addition, his Deputy Carolyn Duncan was also taken into custody.
Mingo is being investigated for alleged criminal misconduct after allegations were raised that he attempted to alter the March 2 elections’ results in favour of the former APNU/AFC Administration.

In fact, it was Mingo’s attempts to alter the results of the elections that led to the National Recount exercise which ultimately proved the major irregularities in figures being called by the Returning Officer when compared to the actual numbers of votes cast.

Other senior officials of GECOM are also being investigated, including Chief Elections Officer Keith Lowenfield – who is also currently facing private criminal fraud charges before the courts.
The Police had said that “formal reports” were received alleging “criminal conduct” by Lowenfield and Mingo, as well as others in relation to the elections and the events that followed thereafter.
“As a result, legal advice was obtained from the Director of Public Prosecution (DPP), and the Guyana Police Force was advised to launch a comprehensive investigation into these allegations” in accordance with its mandate.

On March 2, counting of the ballots cast had proceeded smoothly, and had been completed in nine (9) regions, with the PPP/C in a commanding lead. But the tabulation of Statements of Poll (SoPs) was interrupted in District Four (Demerara-Mahaica) after Returning Officer Mingo switched from the legal procedure – which ensures transparency – whereby each SoP had to be exhibited to the stakeholders present to enable comparison with their copies.

However, Mingo diverted to a procedure wherein the purported numbers from the SoPs were incorporated into a consolidated spreadsheet. This led to immediate calls for transparency from both local and international observers.
This led to the High Court case, when all the parties excepting APNU/AFC protested the sleight of hand that facilitated an inflation of the votes for that party.

Following the High Court’s decision, Mingo was ordered to revert to the prescribed procedure, but he repeated his subterfuge in another guise and submitted totals that varied substantially from those of other parties, and had the APNU/AFC ahead, rather than the PPP/C.

The Chairman of GECOM, Retired Justice Claudette Singh, agreed to a recount of the votes, which had been proposed by then caretaker President David Granger and agreed to by then Opposition Leader Bharrat Jagdeo after an intervention by several Caricom leaders.

In June, the Region Four results gave the People’s Progressive Party/Civic a total victory margin of more than 15,400 votes over their nearest rivals, the APNU/AFC.
The difference was noted by the Head of the Electoral Observation Mission of the Organisation of American States (OAS) in Guyana, Bruce Golding, who had stated that he has never seen such a “transparent effort to alter the results of an election”.
Moreover, it showed that the numbers produced by Mingo were heavily inflated to have a rigged win for the coalition.

On Monday morning, former Government Minister Volda Lawrence also appeared before the Georgetown Magistrates’ Courts to answer private criminal fraud charges.
Lawrence, along with Mingo, was charged in relation to the unverified declaration of results for Region Four. They were accused of forging official electoral documents in an effort to defraud the country.
The particulars of the charge stated that Mingo, having been procured by Lawrence on or about March 5 at the GECOM Command Centre on High and Hadfield Streets, uttered to the Chief Elections Officer (CEO) Keith Lowenfield the election results for Region Four, knowing same to be forged with intent to defraud the people of Guyana.