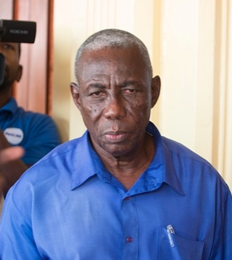 When contacted, Crime Chief Senior Superintendent Wendell Blanhum confirmed that Mingo, along with two of his assistants were arrested.

The employees worked directly with Mingo on Elections Day, and in the aftermath that led to the five-month delay of the March 2, 2020 elections result.

Mingo was arrested days after the Police Force announced that it was launching a comprehensive investigation into reports of electoral fraud, as advised by the Director of Public Prosecutions (DPP) and the Force’s Legal Adviser.

Court Marshalls have been looking for Mingo to serve him with a warrant for his arrest on criminal charges, which were filed by a private citizen but were unable to locate him for several weeks.

The charges were filed in March by Charles Ramson Jr against Mingo, and PNCR Chair, Volda Lawrence in relation to the controversial results for District Four.

Mingo’s attorney, Darren Wade said after his client was arrested, he was given an opportunity, after much delay, to speak with him at CID headquarters.

“I was able to speak with him; I was told the police asked him several questions, and they have since seized his phone. But I am unable to meet with the policemen to understand what is transpiring, and to have an understanding from the State as to why they are holding Mr. Mingo,” the attorney said.

Further, the lawyer said that the issue of bail was also not up for discussion with the police.
On Monday, Mingo was absent from a court appearance, while Volda Lawrence was placed on $100,000 bail after appearing before Chief Magistrate Ann McLennan on private criminal charges, including conspiring to forge documents to show a win for APNU+AFC at the March 2, 2020 general and regional elections.

The charge against Lawrence states that she conspired with persons to forge 24 documents to show a fraudulent win.
Lawrence is also charged with procuring Mingo to, on or about March 4, 2020 at Hadfield and High Streets, Georgetown undertake this task.

She is also charged with uttering to the Chief Election Officer, Keith Lowenfield, a Form 24 Representation of the People Act Regional Elections Return dated March 5, 2020, knowing same to be forged, with intent to defraud the people of the State of Guyana.

Lawrence is expected to return to court on September 11. Mingo is also expected to attend court on the date that has been fixed.

CHAOS
Mingo had created chaos at the Ashmin’s building on High Street on March 5, after he used a spreadsheet to declare the APNU+AFC coalition the winner of District Four, though his numbers were later proven to be false.
He persisted with the false numbers, even after the Chief Justice (ag) Roxane George- Wiltshire had thrown out the declaration, saying the tabulation was not done in accordance with the law.
This led to a national vote recount, which clearly established that the People’s Progressive Party/Civic (PPP/C) was the winner of the elections.

The elections’ results were finally announced on August 2, after a five-month delay.
Meanwhile, the charges against Chief Elections Officer Keith Lowenfield were filed on June 30 by Desmond Morian and Daniel Josh Kanhai, relating to fraud, misconduct in office, and breach of the public’s trust by providing results of the March 2, 2020 elections which he knows to be false.

In charges filed against the CEO, it is alleged that between March 5, 2020 and June 23, 2020, Lowenfield conspired with person(s) unknown to commit a common- law fraud.

Despite his name being thrusted into the spotlight and his being highlighted in the various observer’s reports, Mingo has remained silent. Reports indicate that Mingo is still in the employ of the Guyana Elections Commission (GECOM), but has not shown up for work at the headquarters in months.