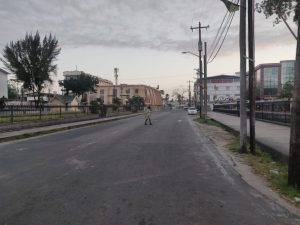 As such, media operatives had to endure the scorching heat of the sun and the persistent rainfall without any shelter or seating area.
Amid the confusion and conflict regarding the declaration of results for Region Four, media personnel flocked the building and attempted to enter, seeing that all the action came from indoors.
But as soon as they attempted to approach the entrance, they were stopped by police officers who formed a human barricade and began pushing those outwards.

To add insult to injury, overseas media establishments who were also given accreditation were allowed full access to the building, while the local reporters were forced to stand outside and approach officials as they entered and exited to get comments.
No proper explanation was given for this.

After publishing an article, Kaieteur News assumed that the uncomfortable situation would be rectified thereafter. But much to their surprise, when media operatives arrived at the centre at Hadfield and High Streets, they were further barred from the building.

As a matter of fact, the media were not allowed within 300 feet of the command centre.
Reporters and cameramen stood behind the barriers with civilians, staring at police officers on the other half, as they held weapons in their hands. No explanation was given as to why the media were not allowed beyond the barrier.
From the distance, reporters could see the international observers and GECOM staffers as they exited the building, but the media could not interview them about anything.
Standing for hours and frustrated, reporters and their cameramen packed up their equipment and returned to their offices.

One journalist took to his Facebook page to express his displeasure.
According to him, “It is very insulting that overseas journalists are being given access to the media building and journalists who are Guyanese and who this (elections) process has a direct connection with, cannot get into the building.”

A Kaieteur News reporter said the fact that GECOM allowed international media operatives to have privileged access to its command centre and local media did not, sets a worrying precedent.