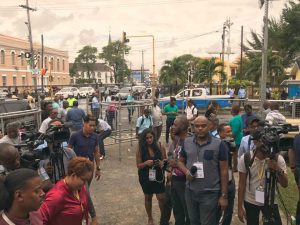 The Guyana Elections Commission (GECOM)’s Command Centre for the March 2, 2020 General and Regional Elections was deemed a “Media Centre” with the various establishments in Guyana, and those from abroad, receiving accreditation to ensure the ease of access.

This has proven to be a very beneficial method as media houses have been able to access credible and accurate information as well as be able to seek relevant clarifications from the Chair, Justice (ret’d) Claudette Singh, Chief Elections Officer Keith Lowenfield, and other key stakeholders that would be stationed there.
Media personnel were allowed to access the Command Centre housed at the Ashmin’s Building on Hadfield and High Streets on Elections Day and the day after.

But on Wednesday, the tack seemed to have changed, as journalists were barred from entering the building, with no proper explanations given as to why this was so.
To add insult to injury, overseas media establishments who were also given accreditation were allowed full access to the building, while the local reporters were forced to stand outside and approach officials as they entered and exited to get comments.

Yesterday, amid the confusion and conflict regarding the declaration of results for region four, media personnel flocked the building and attempted to enter, seeing that all the action came from indoors.
But as soon as they attempted to approach the entrance, they were stopped by police officers who formed a human barricade and began pushing them outwards.

Forced to stand in the pouring rain with no shelter nearby, the journalists protested and demanded reasons as to why they were barred access. But up to press time, no reason had been provided.
One journalist took to his Facebook page to express his displeasure.

According to him, “It is very insulting that overseas journalists are being given access to the media building and journalists who are Guyanese and who this (elections) process has a direct connection with, cannot get into the building.”

A Kaieteur News reporter said the fact that GECOM allowed international media operatives to have privileged access to its command centre that local media did not, sets a worrying precedent.