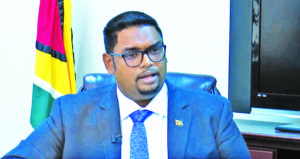 Presidential Candidate of the Peoples Progressive Party Civic (PPP/C) Dr Irfaan Ali had asserted that the latest fraudulent report submitted by Chief Elections Officer Keith Lowenfield is an insult to all Guyanese and the international community.

Lowenfield defied clear instructions from the GECOM Chair Justice Claudette Singh to submit a report based on the certified recount results; he instead submitted a report with the fraudulent figures used by Returning Officer for Region Four Clairmont Mingo.

That report has since been rejected by the Opposition-nominated Commissioners.

According to Ali, Lowenfield’s actions are as if he is a “law unto himself”. The presidential candidate made it clear that these unlawful acts will not be tolerated.

He noted that the PPP/C will continue to peacefully push for the will of the people to be respected.

Moreover, he expressed sadness that at a time when Guyana as a nation should have been focusing on COVID-19, the selfish actions of a few continue to derail any attempts to help those who are impacted directly and indirectly by the virus.

The PPP/C has won the elections with 233,336 votes but the APNU/AFC Coalition is refusing to accept defeat despite massive international pressure.