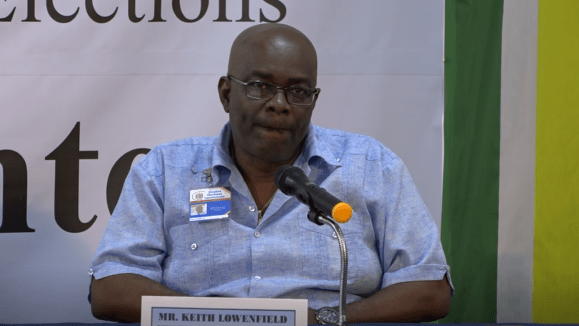 Opposition commissioner of GECOM, Robeson Benn yesterday filed a motion for Chief Elections Officer (CEO) Keith Lowenfield to be fired from his post, the most concrete step so far taken in the wake of increasingly strident calls for the CEO’s dismissal.

The calls have come after several attempts by Lowenfield to thwart the electoral process by giving numbers that were not reflected in the national recount. On Monday, GECOM Chair, Justice (ret’d) Claudette Singh at a meeting at which the CEO was widely expected to be dismissed, gave the CEO a final chance to submit his report based on the recount figures.

Local political party A New and United Guyana (ANUG) believes that this decision is a sign of weakness on the part of the GECOM chair. In a statement issued yesterday, the party said the CEO’s behaviour warranted a much sterner response.

“Lowenfield’s willful disobedience,” the statement read, “recalcitrant and contemptuous attitude through his submission of fraudulent numbers and failure to attend a meeting of national importance scheduled on Saturday 11th July warrants not only summary dismissal but immediate criminal investigation. The CEO has frustrated the work of the Commission in delivering a declaration of the March 2, 2020 elections results, and has undermined the Commission’s fundamental duty of ensuring ‘impartiality, fairness and compliance’ under article 162(1)(b) of the Constitution.”

Another party, The Citizenship Initiative (TCI) issued a statement yesterday applauding Singh’s patience but, in less explicit terms than ANUG, also called for the CEO’s ouster from the process.
“We urge,” the party argued, “that Tuesday 14th be the final stop of this CEO’s involvement in the 2020 Elections process (and any future elections process in Guyana) regardless of whichever route he takes. We ask that Madame Chairwoman utilize her full authority as Chairperson of GECOM to usher this prolonged elections cycle to its conclusion, and for the Commission to hold any GECOM Officer who has proven themselves unwilling to act professionally and with integrity to full accountability for their actions.”

Other organizations, both in Guyana and abroad, have increasingly been explicit in their calls for Lowenfield’s dismissal. The strongest call so far has come from the Organization of American States (OAS). In an initial statement on Friday, the OAS had urged that GECOM remove what it referred to as ‘obstacles’ preventing closure to the process.
“The OAS,” the statement read, “notes that one of the principal obstacles to completing Guyana’s current electoral process is a person whose duty it is to defend Guyana’s democracy through ensuring respect for the results of elections.”

When on Saturday the CEO, as well as the three government Commissioners, failed to turn up to a scheduled meeting, the organization released another, stronger statement, specifically pointing to Lowenfield by position:

“The Organization of American States (OAS) notes that the Chief Elections Officer of Guyana, in direct opposition to the instructions of the Chair of the Guyana Elections Commission, has submitted a final report which includes data compiled prior to the national recount; data which had already been deemed to be questionable. There can be no justification for this action. As intimated in our statement of July 10, this confirms that the Chief Elections Officer is acting in bad faith and contrary to the interest of democracy in Guyana.”

Lowenfield is expected to know his fate today, at least in connection with his responsibility to deliver the election results. The GECOM Chair indicated yesterday that should he fail to produce a report based on the recount results, he would be replaced, for the purposes of producing that report, by his deputy, Roxanne Meyers.