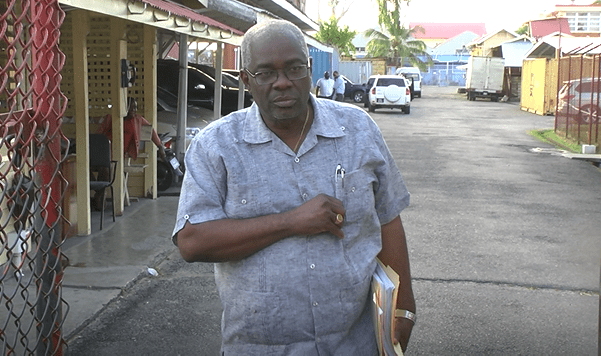 As the probe continues into electoral fraud allegations, the matter against Keith Lowenfield, the Chief Elections Officer of the Guyana Elections Commission (GECOM), is postponed for next month.
Lowenfield is facing six electoral fraud charges that were instituted by the Guyana Police Force (GPF). Those six charges include three counts of misconduct in public office and three counts of forgery.
Lowenfield was released on a total of $300,000 bail for those charges.
The matter is being heard by Principal Magistrate Faith McGusty in the Georgetown Magistrates’ Courts.
The matter was expected to continue yesterday, but due to a seminar/conference the Magistrates had to attend, the matter was postponed.

However, when the matter continues, Magistrate McGusty will receive submissions from Lowenfield’s lawyer, Nigel Hughes, and the prosecution, as to why the matter should be heard in the Magistrates’ Courts as opposed to going to the High Court before a judge and a jury, as requested by Hughes.
Last month, the Director of Public Prosecution (DPP), Shalimar Ali-Hack, S.C, withdrew the private criminal charges that were filed against Lowenfield.

During an interview with reporters, Hughes had stated that the court was informed that the DPP has taken the decision to withdraw the three private criminal charges that were filed against Lowenfield on June 30, 2020 by People’s Progressive Party/Civic (PPP/C) member, Desmond Morian, and The New Movement Party (TNM) executive, Dr. Daniel Josh Kanhai.
Kaieteur News was informed that the private criminal charges were withdrawn because the State has instituted similar charges against Lowenfield.
Under Article 187 (1) (c) of the Constitution of the Co-operative Republic of Guyana, the DPP has the power to discontinue the charges against Lowenfield.

According to Article 187: “The Director of Public Prosecutions (referred to in this article as ‘the Director’), shall have power in any case in which he or she considers it desirable to do so – (a) to institute and undertake criminal proceedings against any person before any court, other than a court martial, in respect of any offence against the law of Guyana; (b) to take over and continue any such criminal proceedings that may have been instituted by any other person or authority; and (c) to discontinue at any stage before judgment is delivered any such criminal proceedings instituted or undertaken by him or her or any other person or authority.”

Police had announced last August that they will be conducting a comprehensive investigation into the criminal conduct of Lowenfield; the Returning Officer of Region Four, Clairmont Mingo; and others in relation to the March 2, 2020 General and Regional Elections and the events that followed.
During the ongoing probe, several GECOM officials were arrested and placed before the courts.