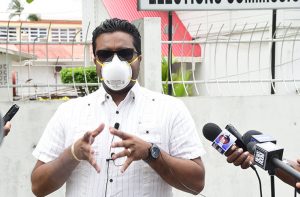 Electoral Commissioner, Sase Gunraj, yesterday said that Chief Elections Officer(CEO), Keith Lowenfield “eyepass” the Guyana Elections Commission (GECOM), after it was revealed that the official failed to submit a report on the results of the recount, in line with the instruction of the Chair, Justice (Ret’d), Claudette Singh.

Addressing the press outside of the Commission’s Kingston office yesterday, Gunraj noted that this is the third instance in which Lowenfield has disregarded the Chair’s instructions.
Gunraj said that he views Lowenfield’s actions as a very clear and flagrant violation of the specific instructions contained in the Chair’s letters to Lowenfield.

The CEO, in his absence, sent in a report which did not reflect the results of the recount, with figures largely similar to the 10 declarations held in abeyance, including the fraudulent March 13th declaration produced by Region Four Returning Officer, Clairmont Mingo.

“Now, I can choose to use all the nice words,” Gunraj said, “like contemptuous and all of that, of the instructions, and violation of the instructions. But you know what the word is that was on my mind this morning when I saw that? It is that the CEO eyepass the Commission. That is the position.”
Gunraj said that he is not surprised by these developments.

“You know why? Because, leading up to the non-arrival of my colleague Commissioners, I had already seen on social media, indications of this. So it tells me that persons out there know what is happening. It tells me that they have an indication of what the forward steps, the forward insidious steps that the riggers are attempting to do.”
Gunraj further reported that there was no quorum at the meeting because the three Government-nominated Commissioners did not turn up.

He argued that the Commission “can’t be hamstrung by the actions of one or two people who are hell-bent on holding this country hostage.”