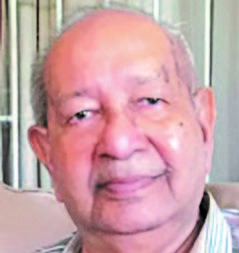 The longest-serving Speaker of Guyana’s National Assembly, Sase Narain, passed away on Tuesday at his Queenstown, Georgetown home. He was 95. Born on January 27, 1925, to the late Oudit and Soukhai Narain, he grew up at Pouderoyen on the West Bank of Demerara.

Sase Narain attended Malgre Tout Primary School, where he completed his schooling. He then attended the Modern Educational Institute in Georgetown, where he completed his Senior Cambridge Examination. Sase Narain then travelled to the United Kingdom to pursue legal studies.
In 1957, upon completion of his Solicitors Examination at the City Law School in Chancery Lane, London, Sase Narain returned to Guyana. He was appointed Senior Counsel and served as Speaker of the National Assembly from 1971 to 1992.

In 1991, he became the first Speaker to expel a Member of Parliament after Minister of Agriculture Isahak Basir threw a drinking glass at him.
He also served as Deputy Chairman to both the Public Service and Police Commissions under the PNC’s rule in the 1960s.

After leaving his post as Speaker, the Senior Counsel returned to private practice and later retired. He was the recipient of Guyana’s second-highest national award, the Order of Roraima (OR).
In a statement, former President David Granger, Central Executive Committee and members of the PNC said that they are saddened at the death of the former House Speaker.

“The leader, central executive committee and members of the PNCR express our deepest sympathy to the relatives of Mr. Sase Narain OR, SC, CMG,” the statement added.
In addition, the Bar Association of Guyana in a missive stated that Narain joined the legal profession in Guyana as a solicitor, demonstrating the power of the pen.

“Senior’s training, skill, and strength in drafting pleadings provided the instructions and foundation for many of the legendary barristers (advocates) recorded in the reports of cases in Guyana.”
The release added that clearly not content with the traditional in-office and supportive role of a solicitor, he accepted the platform for his voice to be heard in 1971, when he commenced his service as Speaker of the National Assembly of Guyana.
“A fierce, controlling and resounding voice heard in the halls of Parliament for in excess of twenty years,” the association stated.

“His collective contributions to the legal profession in Guyana were recognised with Senior ‘Taking Silk’ and being admitted to the Inner Bar, a distinction previously limited to Barristers. It is as a consequence of his decades of service to the law, that Senior will be part of the law reports, the Hansards of the Parliament and our beloved memory. There is yet another attribute of Senior which should leave an indelible impression on the minds of all legal practitioners, the art of drawing and preparing a Bill of Costs.”
The Bar Association extended deepest condolences to the family of Narain. Sase Narain was a widower at the time of his death and leaves to mourn his children, grandchildren and great-grandchildren. He will be cremated today.