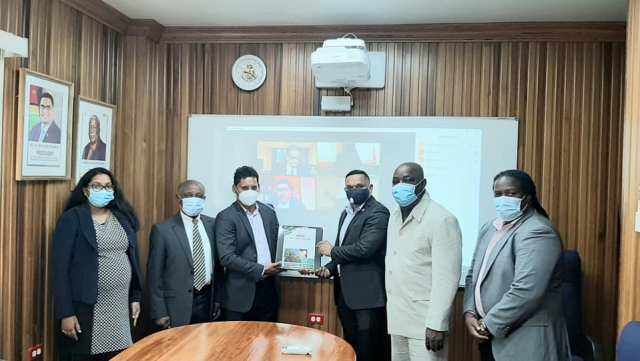 Natural Resources Minister Vickram Bharrat, moments ago, received a report with recommendations from the Advisory Panel on Local Content.

The Local Content Panel was convened by the President Dr Irfaan Ali-led Government to come up with a local content framework for Guyana in light of the oil and gas sector.

At the end of August, President Ali had assembled a high-level team of experts to advise Government on the formulation of a strong Local Content Policy that will ensure all citizens benefit from the country’s lucrative oil and gas sector, as well as other sectors that see Foreign Direct Investment (FDI).

Among the experts on the panel is Trinidadian Local Content expert Anthony Paul. Paul has played a critical role in the formulation of local content policies in Ghana and has been vocal about local content issues in Guyana.

Paul is the Principal Consultant, Energy and Strategy, Association of Caribbean Energy Specialist Limited. He spearheaded a Rapid Analysis of the State of Readiness of Guyana’s Hydrocarbon Regulatory Framework study, facilitated by the United Nations Development Programme (UNDP) in 2016.

Also on the panel is former Foreign Affairs Minister under the previous A Partnership for National Unity/Alliance For Change (APNU/AFC) Government, Carl Greenidge. Greenidge, an economist by profession, also served as Finance Minister from 1983 to 1992.

Apart from Paul and Greenidge, the panel also includes former Trinidad Energy Minister Kevin Ramnarine. Ramnarine is no stranger to these shores, having given speeches and been vocal on energy-related issues affecting Guyana.

Ramnarine served as the Minister of Energy of Trinidad and Tobago (2011 to 2015). During his tenure, he created a positive climate for investment, including the fiscal reforms which resulted in major investments in deep-water exploration.

Prior to being appointed Energy Minister, he held positions in the Energy Chamber of Trinidad and Tobago and at British Gas, where he worked as the Lead Economist.

The panel also includes Finance Professor Floyd Haynes and trade unionist Carvil Duncan. Haynes is an adjunct Professor in Finance and Accounting at the University of the District of Columbia, and he is a public lecturer in Leadership and Management.

Guyana Manufacturing and Services Association (GMSA) Head and former presidential advisor Shyam Nokta is the Chairman of the panel.

Nokta also previously served as Head of the Office of Climate Change, where he coordinated Guyana’s response to climate change, the development and implementation of the Low Carbon Development Strategy (LCDS), and REDD+ Partnership with the Kingdom of Norway.