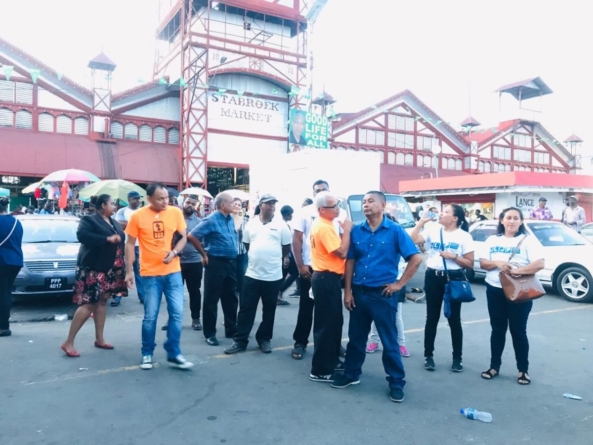 A New and United Guyana (ANUG), The New Movement (TNM) and the Liberty and Justice Party (LJP) held their first public meeting together yesterday to explain why they decided to combine the votes they will receive on Election Day.

The meeting which was held at the Stabroek Market Square, was an opportunity for the representatives of the three parties to explain their decision and speak about their parties’ plans.  There was a small gathering.

The presidential candidate of A New and Unity Guyana (ANUG), Ralph Ramkarran, explained that the event was held to celebrate the joining of the parties. He made it clear that they are not a coalition and each party will keep their identity and contest separately but their votes will be combined.

He encouraged voters to examine each party’s programmes, presidential candidates and lists and decide which of them they would support. “When you vote, the votes will be counted for each political party separately and when they are counted we will all know how much votes we get,” he said. 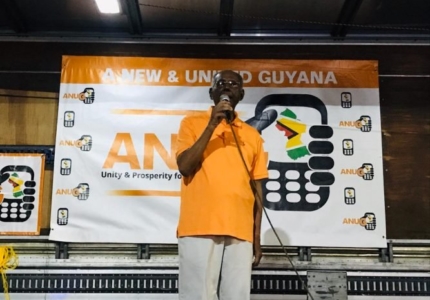 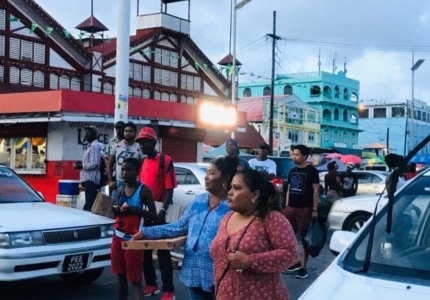 He added that the votes will be combined and the number of seats that each party will be awarded will be in accordance with the number of votes each receives. He said they will then distribute the seats accordingly. The left over votes which do not amount to one seat will also be combined and it may give them another seat or the largest remainder, which will entitle them to another seat. “So we all gain by this combination,” he stated.

However, he emphasised that they will be leading in unity. He said that the parties campaigned all over the country before they came together and were advised by the people that the new parties needed to join together to force the major parties to do something about the ethnic division and the lack of progress in Guyana.

Ramkarran said that three parties regret that they were not able to create a “full and complete” unity but noted that at least they have tried and made a start. He reminded attendees of what had happened at the 2011 elections when voters reduced the majority of the People’s Progressive Party/Civic (PPP/C). He said the electorate was saying they should join with the opposition to form a government. He said that if the then President Donald Ramotar had joined with the opposition, he would have been in power until the next election and by the next elections after that, they would have had a shared government.

He said if that had happened, Guyana would have had an expert who would skillfully negotiate the oil production contract between Guyana and ExxonMobil. He said that contract would have received a US$100 million signing bonus and they would have had 8% royalty compared to the current 2%. He added that even the Minister of Finance admitted on live radio not knowing who negotiated the US$18 million bonus. “And this is the quality of governance that we have in Guyana when one of the major political parties is alone in office. We need that to change,” he said.

Further, he said when the Alliance of Change (AFC) joined with A Partnership for National Unity (APNU) and became subservient members of APNU, it was decided that ANUG must establish itself as a political party to do the job that the AFC was supposed to do, which is to bring constitutional reform that will bring shared governance to Guyana and that will keep the two political parties in check.

Additionally, he said, the reason why Guyana has faltered in development and progress since it became independent was because of Guyana’s inability to find a system of governance that will bring together the main ethnic groups of Guyana. He said ANUG’s very own doctor of politics, Henry Jeffrey, has said that the lack of cooperation between the two political parties in the country is why the country is behind in its development. Due to that he said, they decided to form ANUG so they can ensure one political party does not have the absolute majority.

Ramkarran then counselled listeners that even if they are affiliated with the two major political parties they will not be betraying their party by voting for any of the three parties because if they were to be awarded a few seats they will create a system where all the political parties will share in governance. The plan that we have will bring a new day into the politics of Guyana. It will create an entire new regime of cooperation. It will mean that the policies propagated by the APNU and PPP/C will be brought together, we will eliminate corruption, reduce crime and we will ensure that there is no bickering over elections,” he said.

Meanwhile Jeffrey stated that the only way Guyana can develop and progress is if 100 per cent of its population are in agreement. “No country can run with half its people against the government,” he said. He urged listeners to focus on the country’s natural resources and how each individual can benefit from them rather than focussing on politics and racism. He added that each of the three parties share similar goals which is why they have joined together so that votes will not go to waste. “We will hold the balance in parliament and we will have shared governance in this country,” he stated.