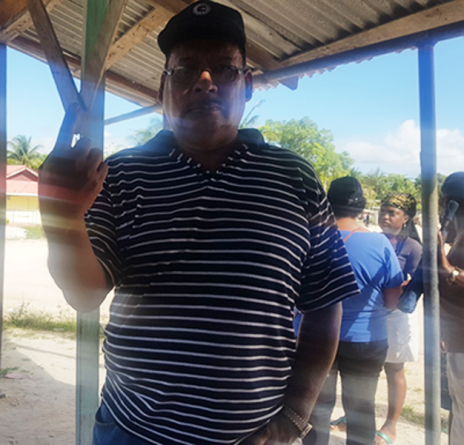 No stumbling block prevented residents of Region 10 from casting their ballots at the various polling stations on Monday. Whether they were wheelchair-bound, with crutches, with walking canes, with a young baby in a mother’s hands, or an elderly person being carried, residents were prompt and eager to get their fingers stained after putting their Xs next to the party of their choice.

This was a regular feature at many of the polling stations visited by the Guyana Chronicle in Linden. Making up the long queues were many elderly persons who had to be carried or assisted by a relative. Residents with injuries to the legs were also seen walking with crutches to the respective polling stations, while others had to be lifted. Mothers did not make having a young baby an excuse to not get to the stations, as they too were seen straddling their children in blankets, some even before the opening of polls at 06:00hrs.

At the Linden Foundation Secondary School in Amelia’s Ward, one of the first persons to cast their ballot was Ralph Bruce, who said he went to sleep with it in mind, that he needed to be early at the polling station, despite having a knee problem and being dependent on a walking cane. “Well I went to sleep with that on

my mind; I travelled all the way from the bush to bring out some people and I woke up since four,” he said. “Let them come out and vote, if you can’t walk, let somebody lift you and bring you, every vote counts,” he said.

Mr. Leon Bremner of Coomacka, Linden, is both elderly and disabled. While he did not make it to the polls very early, he ensured that his ballot was cast before midday. Bremner, who was assisted by his wife, said it was not too difficult getting to the Coomacka Primary School, since he does not live too far away. He said that despite the odds, he believed his vote was important because he is differently abled and his vote is a choice for Guyanese in the differently abled community.

Mrs. Constance Charles, an 83-year-old resident of Coomacka, ensured that while she seldom leaves her home because of the aches and pains that come with old age, elections day had to be an exception, and she has regretted it. “I don’t know, I see everything going well, a car brought me and a car will take me back. I encourage my fellow elderly persons to come out and vote if they could make it, because I just trying,” Charles said.

Help along the way
For those having difficulty with transportation, several private citizens and party representatives volunteered their services to shuttle persons desirous of voting to the polling stations. Buses, cars, three-wheel motorcycles and other modes of transportation were observed transporting persons to polling stations throughout the day, both on the Wismar and Mackenzie shores. Former Member of Parliament Jermaine Figueira, has been instrumental in organising transportation for voters in the Block 22/Wisroc District.

Voters were also provided with refreshments for those who were forced to stand in long queues, waiting to vote. People’s Progressive Party candidate Sherry Fyfe, was seen at the New Siler City Secondary School distributing breakfast and beverages for persons at the polling stations.

Amelia’s Ward resident Anthony White, teamed up with several taxi drivers to shuttle persons to the four polling stations in the community. He said Amelia’s Ward is a very big community and residents living in far-flung areas were in need of assistance.