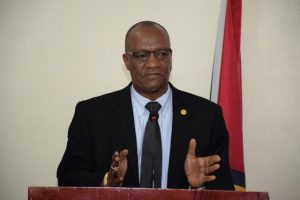 “Anti-national” was the term used by the A Partnership For National Unity + Alliance For Change Coalition’s (APNU/ AFC) elections campaign manager, Joseph Harmon, when he sought to describe those who are lobbying for international sanctions to be imposed on Guyana.

Harmon addressed the media at a press briefing yesterday where he stated that the party has taken heed of the threats being made and called for the stakeholders involved to meet and sort out differences.
His comments emerge at a time when high ranking heads from the international community have threatened Guyana with heavy sanctions if a government is sworn into office on the basis of non-credible results from the March 2, 2020 General and Regional Elections.

Even the People’s Progressive Party (PPP) has made its position clear that if incumbent President David Granger is sworn in on flawed results, it will support the threatened heavy sanctions.
Harmon told the media that, “sanctions is something we have to be concerned about in this country because it can affect the development of the country, it can stymied that development.”

According to him, “…anyone who feels that sanctions will affect only one group of persons, they are probably not thinking well, because once Guyana is affected, we all are affected.”
Harmon dubbed the calls “anti-national” and stated that, “I don’t see any country in the world that actually would want to invite that level of sanctions knowing fully well the developmental path on which we are.”

The Campaign Manager asked for a “sit down” with the Opposition and other smaller parties to “work out our differences.”
“Sanctions are not something that you play around with. Sanctions is not the way. This is not the way.”
We are not “anti-national”

But Opposition Leader, Bharrat Jagdeo, at a later press briefing responded to the comments made by Harmon. In so doing, he opined that they are not “anti-national” for calling on sanctions.
Jagdeo made mention that President David Granger had once requested sanctions back in November 2014 when he held the position as Opposition Leader.

“Granger himself has requested sanctions in the past…in 2014 that the country must face sanctions from abroad if Donald Ramotar did not end the prorogation of parliament…now he does not want sanctions.”

Jagdeo made it pellucid, “we are not anti-national” even as he quipped “the people who are anti-national is the APNU/AFC cabal that will put the country at risk and all of our people at risk from sanctions because of their lust for power,” he said.