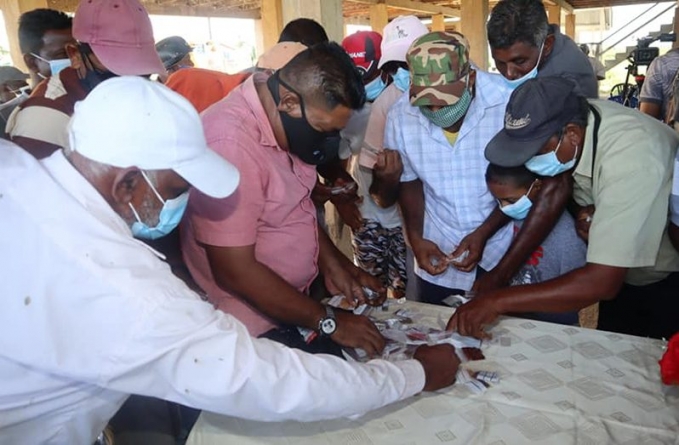 AGRICULTURE Minister, Mr. Zulfikar Mustapha has reaffirmed Government’s commitment to ensuring there is development across the country, during a recent outreach to communities in Region Three (Essequibo Islands-West Demerara).

While addressing farmers at a meeting in Leguan, Minister Mustapha told the gathering that their community will not be exempt from Government’s vision for development.
“Sometimes development takes a long time; sometimes development might pass you and go to another area, based on the priorities of the Government. I am not saying development will pass Leguan; I just want to let you know how things happen sometimes,” Minister Mustapha said. “But I want to reinforce, and I want you, the residents to know, that Leguan is a very important community to us in the Government, and we will do our best to resolve your issues,” he added.

Farmers indicated that the common issue on the island is the lack of proper drainage, in terms of the need for some amount of rehabilitation works to critical D&I structures.
Jairam Rampersaud, a farmer from Leguan, said his farmland and home are constantly flooded due to a defective koker close to where he lives.
“At present, the koker close to me is in a deplorable state; it is a self-acting koker, and, over the years, the water flows straight to my land, and my home is often flooded. I would like for you to make some intervention to help the situation at present. The koker is falling apart, and water is seeping through the entire structure,” Rampersaud said.
After listening to the many issues raised by several farmers, Minister Mustapha promised that his Ministry will be working with the regional office to develop a work programme to remedy them.

“Since taking office as minister, there has been one common issue faced by persons in the farming communities across the country,” he said, “it is clear that the previous administration has failed to provide basic drainage and irrigation services to citizens. There has also been a clear neglect to critical D&I structures across the country, and clearly the structures in Leguan were no exception. I had meetings with farmers from Hogg Island and Wakenaam earlier today, and they, too, have similar issues. I’ve committed to having an engineer go to those communities to carry out a needs assessment that will be factored into a work programme to ascertain what works are needed to ensure residents benefit from proper drainage; you will also benefit from that exercise. We cannot do extensive works now, with this Emergency Budget, but rest assured, we will work to have some of the critical issues resolved. Other major works will be budgeted for in 2021, and other budgets to come.”