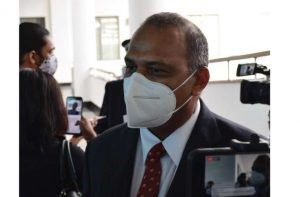 This does not cater for adults, however. And instead of amending this existing legislation, a new legislation will be introduced. Once this legislation is presented to Parliament, it would be read and debated on. This allows for a ventilation of ideas from the government and the parliamentary opposition. “COVID-19 is different in the sense that older people are the ones we want to vaccinate… Traditionally, vaccines are used to prevent childhood diseases,” he explained but added too, “The bill is really trying to fix that gap in our legislation, so I don’t expect too many challenges to it.” This particular bill, Dr. Anthony explained, was developed out of the real problems presented by the pandemic. He emphasised that the only way to exist this pandemic is by immunising the population.

Even though immunisation is the exit strategy of getting out of this disruptive pandemic, the Minister has consistently emphasised that the vaccine shouldn’t be one that persons should be outrightly forced to take.“There are sections of the new law where we speak to who should get immunised and there are exemptions… Those things are clear,” Minister Anthony told the Guyana Chronicle in an exclusive interview on Wednesday. The exemption process, he said, is similar to the ‘opt out’ mechanism (the dissent forms offered to school children) employed through the ministry during the rollout of its Mass Drug Administration (MDA) campaign for the elimination of Lymphatic Filariasis (LF).

During the MDA, it was understood that school children would receive dosages of the tablets in accordance with their age. But, if parents did not want their children to take these drugs, they could have signed the forms refusing the tablets. “Basically, it’s like that… if you don’t want it, there is a process by which you can opt out,” Dr. Anthony said. A specific COVID-19 Task Force is expected to oversee the rollout of the vaccines for the virus. This task force will include government agencies, the private sector, members of the Joint Services and hopefully, expert immunologists. The rollout of vaccines for COVID-19 will require careful logistical planning and management, but also specialised resource capacity. It is already known that cold-storage facilities are required.

The Ministry of Health has published bids for private contractors to procure and install refrigerators and vaccine carriers, which must be completed before Guyana receives its first quota of the COVID-19 vaccines next year. Stakeholders have advised, however, that public trust in these vaccines must be built in addition to the other prerequisite measures such as the correct infrastructure, training and perhaps even legislation.

The first set of vaccines Guyana will be receiving will be through the COVAX Facility, a global initiative geared at accelerating the development and manufacture of the COVID-19 vaccines, and then providing them in a guaranteed rapid, fair and equitable manner to those countries which need them. Those vaccines will be free and the first three per cent of the vaccines will be used for the frontline health workers and the next tranche will be used for older persons and persons with higher risks, such as those with co-morbidities.

The Guyana Chronicle recently reported that the Head of the School of Nursing at the UWI’s Five Islands campus, Karen Josiah, emphasised that myths and harmful perceptions of the vaccine need to be dispelled. Additionally, she said that public officials and healthcare workers need to work to ensure that the public’s fears are eradicated. Though the vaccines for COVID-19 have been developed at a record speed, safety and efficacy of the vaccines approved (or will be approved) have not been compromised. So far, Pfizer, Moderna and Oxford Astrazeneca are three widely-known vaccines that have been approved. The Pfizer and Moderna vaccines are already being distributed across the United States. Results so far indicate that the vaccines are effective in preventing COVID-19 and they seem to be safe.