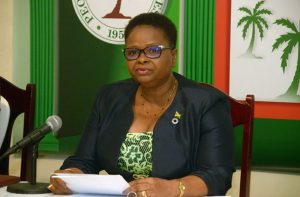 IT is likely that chairperson of the People’s National Congress/Reform (PNCR), Volda Lawrence and Returning Officer (RO) for Region Four (Demerara-Mahaica), Clairmont Mingo, will appear before the Georgetown Magistrates’ Court today to answer to private criminal charges filed against them in relation to the 2020 General and Regional Elections.

Ahead of their expected appearance, some supporters of Lawrence have been lobbying for those who ‘Stand with Val’ to engage in ‘silent support’ outside the Magistrates Court today while wearing facemasks and adhering to social distancing guidelines.

A poster circulating on social media argues that the accusations laid against Lawrence are false. Meanwhile, the poster has been shared by the former minister’s social media page and declares on her behalf “I am innocent!” Other executives of the APNU+AFC are also circulating the call for ‘silent protest’ today.

Speaking with the Guyana Chronicle on Sunday, special prosecutor in the case, Glenn Hanoman also brought attention to the said poster but noted that he is unaware whether the police had successfully served the charges against Lawrence.

“The DPP and the Police have sort of taken over the matter but, as far as I know, up to yesterday [Saturday], it was not served… I noticed that [Attorney-at-Law] James Bond has been calling for people to come out on Monday to support her, but she hasn’t been served. Of course, both Mingo and Lawrence are aware, because of all the publications on this matter in the newspapers, that they have a matter. So, maybe Ms. Lawrence is doing the right thing having been made aware publicly,” he said.

Meanwhile, Hanoman said that several attempts have been made to serve to Mingo the charges, and though there is a rumour that he has been served, he [Hanoman] has received no word of this. He said that today will tell whether Mingo would similarly opt to appear in light of the matter being public knowledge.

The special prosecutor said that Mingo has been making very brief appearances at the Guyana Elections Commission (GECOM) office on the West Coast of Berbice, likely to sign in or to collect his salary.

The Guyana Chronicle’s effort to contact the Commissioner of Police for further information on the matter was futile.

The charges filed were first called on Friday, August 14, 2020, before Magistrate Faith McGusty at the Georgetown Magistrate’s Court.

However, the matter was adjourned, as the defendants in the case were not present in court. It was noted then that the matter would be expected to be called today.

Particulars of the offence state that Mingo, having been procured by the accused Lawrence, on or about March 5, 2020, at Hadfield and High Street, Georgetown, uttered to the GECOM Chief Elections Officer, Keith Lowenfield, a Form 24 Representation of the People Act Regional Elections Election Return dated March 5, 2020, knowing same to be forged, with intent to defraud the people of the State of Guyana.
The charges alleged that Mingo and Lawrence colluded with each other to forge that Form 24 document. Lawrence’s signature was affixed to the said document, which had shown a win for the APNU/AFC.
However, when the People’s Progressive Party/Civic (PPP/C) counted from the Statement of Polls (SoPs) in its possession, it showed otherwise, while the National Recount of ballots cast at the Elections eventually declared the PPP/C the winner.