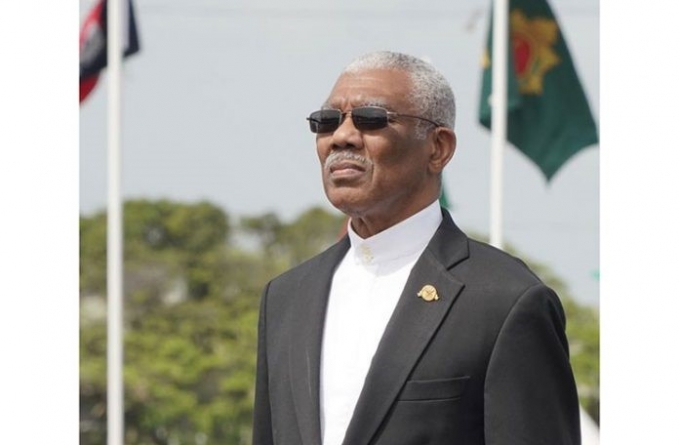 Caretaker President David Granger, in a statement on Monday, has urged Guyanese to remain calm and to desist from engaging in activities likely to raise tensions as they await the decision of the Chief Justice on how the Guyana Elections Commission (GECOM) should treat with its final declaration on the 2020 General and Regional Elections.

In the statement, the President acknowledged that the Opposition has been spreading a narrative that is “no more than a falsification of reality” which has contributed to disorder and violence in society.

“Guyanese, we have all witnessed the lawlessness and violence that have been unleashed on innocent school children, citizens and police officers in several districts of our country. Our security forces have been working to quell disorder and to bring the perpetrators to justice,” he said, further assuring:

“It is my sworn duty, as President, to uphold the Constitution and keep our citizens safe. I intend to do so. I will not allow political malefactors to hijack our democracy and compromise public order and human safety. Law and order will be maintained.”

The President said that contrary to the mistruths being spread by the Opposition, Chairman of GECOM, Justice (ret’d) Claudette Singh has indicated that she will await the outcome of that matter before making a final announcement.

Furthermore, the Head of State said that there will be no swearing-in ceremony of the President until this is done.

“I assure the nation that, at all times, I have acted in accordance with the Constitution and Laws of Guyana. After the elections on March 2, the nation awaited the declaration of the results by the Elections Commission after completing its work. GECOM is an independent constitutional agency over which I and the Executive have no control. I assure you, that as President, I cannot, did not and will not interfere in the work of GECOM,” he said.

“I am confident that there will be a peaceful and lawful resolution to this issue in a short period of time. I appeal to you to join me in allowing the judicial system to perform its functions. I appeal to you to allow the Elections Commission to execute its mandate to deliver credible elections to the Guyanese people.”

President Granger also chastised the Opposition for the undeniable creation of an “atmosphere of intimidation and fear” at the office of the Returning Officer (RO) of Region Four, which led to the interruption of GECOM’s work.

The Opposition, People’s Progressive Party/Civic (PPP/C), has been roundly condemned by a number of groups for invading the command centre of GECOM between the night of March 4, 2020 and the whole of March 5, 2020.

Several live Facebook videos from inside the building showed Leader of Opposition, Bharrat Jagdeo telling International Observers that Justice (Ret’d) Singh was being held against her will and the police is complicit.

The chants later turned into a physical confrontation with ranks of the Guyana Police Force (GPF) as the agents — mainly men —- associated with the PPP/C and a number of other smaller political parties attempted to bulldoze their way into the room in which the GECOM Chair was located.

The President said that while such “lawless” actions of party leaders do not send the right example to citizens, Guyanese nonetheless must understand that they will have to live together despite the outcome of the elections.

“Guyanese, I acknowledge that, one week after General and Regional Elections were held, we have not yet had the final declaration of results and uncertainty and unease have arisen,” President Granger said.

“Guyanese, I appeal to you to remain calm and not to engage in any activity which can lead to the heightening of tensions in society. I urge you to go about your business in a peaceful manner. Some damage has already been done to social relations in our communities. We must repair that damage. Guyanese are asked to contribute to ensuring that we maintain law and order at all costs. Guyana is a lawful State. We must allow the institutions which we revere and on which we rely to work to ensure that there will be a fair outcome to the issue which we now face. Guyanese will continue to live with each other. We must not allow ourselves to be provoked into taking any action which will engender hate or disharmony.”

The case on the aforementioned matter will be heard today at 15:00hrs.

Chief Justice, Roxane George-Wiltshire has called on all of the parties involved to be responsible in their actions, noting that while the ruling may not be pleasing in the eyes of all, the court’s decision must be respected.