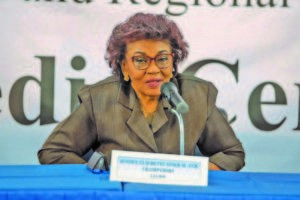 Justice Claudette Singh, the Chair of the Guyana Elections Commission (GECOM), in an affidavit to the High Court has made it clear that the Constitution mandates GECOM to act where there are questions over the fairness and transparency of the electoral process and that the Court should not prevent GECOM from carrying out a recount which the Chief Justice has already accepted as the remedy if there are discrepancies with the Region Four vote count.

APNU+AFC candidate Ulita Moore has asked the court to block the recount on the basis that GECOM cannot act on an agreement made between her leader President David Granger, Opposition Leader Bharrat Jagdeo and the Caribbean Community (CARICOM).

But in her affidavit, the GECOM chair said the decision of the recount was GECOM’s and that the CARICOM team was simply the mechanism to ensure transparency and not a case of political leaders usurping the functions of GECOM as an independent constitutional body.

In her affidavit, the GECOM chair noted that Article  161 (1) (b) of the Constitution provides clear and convincing authority for GECOM to take action it finds necessary and expedient to ensure impartiality, fairness and compliance with the provisions of the Constitution or any Act of Parliament.

She cited the Chief Justice’s recent ruling on the breach of the law by Returning Officer Clairmont Mingo, where the Chief Justice said that in today’s context, where persons are to exercise statutory duties they must do so transparently and that the Returning Officer’s statutory duties are laid out so as to “engender transparency and accountability and thereby to ensure impartiality and fairness.”

The full Commission, including the Chair, had agreed to the recount. In her affidavit, Justice Singh pointed to Section 162 (1) (b) of the Constitution which states that GECOM “shall issue such instructions and take such action as appear to be necessary or expedient to ensure impartiality, fairness and compliance.”

As such, she said with or without the agreement of the President, Opposition Leader Jagdeo and CARICOM, the Commission has separate and independent powers under the Constitution to execute supervisory powers in respect to the electoral process.

“This means the Commission can order a recount,” Justice Singh stated in her sworn affidavit.

“The intention of Parliament as to vest GECOM with independent supervisory powers to ensure fairness, transparency and impartiality of the electoral process.

“It is further submitted that Section 140 provides GECOM with a further protective shield to allow the body to act independently and unfettered to provide the nation with a credible electoral process.”

There have been arguments made that the matters being challenged belong to an election petition after the results are declared.

But Justice Singh argues that the electoral process is not yet completed since the word “election” means the whole process of an election which starts with the proclamation of the elections date to the issue of the result of the election.

Justice Singh argued that GECOM was in the process of exercising its constitutional supervisory functions when it was stopped by the Court.

Unlike the argument from the APNU+AFC applicant in the case, Justice Singh indicated that the agreement by the political leaders is not to be read as politicians taking over the process.

“The CARCOM Mission was simply the mechanism to give effect to the recount,” she stated.

To bolster her case, she cited the order which was prepared to be gazetted to carry out the recount.

“AND WHEREAS the declaration of results pursuant to Section 84 (1) of the Representation of the People Act Chapter 1:03 have been made but marred by controversy and challenged in legal proceedings in the High Court.

“AND WHEREAS the Guyana Elections Commission seeks resource in Section 22 of the Election Laws (Amendment) Act No 15 of 2000, to remove difficulties connected with the application of the Representation of the People’s Act Chapter 1:03 in implementing decisions related to the conduct of the recount of all ballots cast at the said election, the tabulation and declaration of results and supervision of the entire process by the High Level team….”

The order, Justice Singh, therefore argued, provides the reason for the necessary intervention by the Commission and “shows clearly that the CARICOM team was just the mechanism to assist in providing credible elections to the nation.”

She also noted the undertaking she gave to the Chief Justice on March 13, namely, “that the tabulation process was in progress and that should there be discrepancies in the Statements of Poll as called by the Returning Officer and those held by political parties then the discrepancy should be noted and at the end of the process if they could not be addressed then I will endeavour to facilitative a recount at the level of the Commission.”

The GECOM chair said that this undertaking was accepted by the court, which has concurrent or similar powers to that of the Chief Justice, the undertaking cannot now be injuncted or stopped.

As such, she argued that the current court should not fetter GECOM in the exercise of its constitutional role and functions.

She said that though the request by several parties for a recount was rejected by the Returning Officer, the Commission can intervene and correct this.

“Thus it would be unlawful for the court to direct the Commission on the way forward to complete the process where these issues are still outstanding,” Justice Singh states in her affidavit and said the process “must be completed in conformity with the law, fairness and impartiality…”

She urged the court to heed the words of then Chief Justice Desiree Bernard in a 2001 case when she stated: “In the present volatile situation which pervades our country, no effort must be spared to assure everyone that the process was fair and impartial. Lingering doubts that hang like a sword of Damocles over the head of the Commission must be removed. Confidence in the electoral process must be restored.”

Therefore, the GECOM Chair said the application to block the recount should be rejected and the Commission should be permitted to execute its constitutional role and functions with or without the CARICOM agreement.