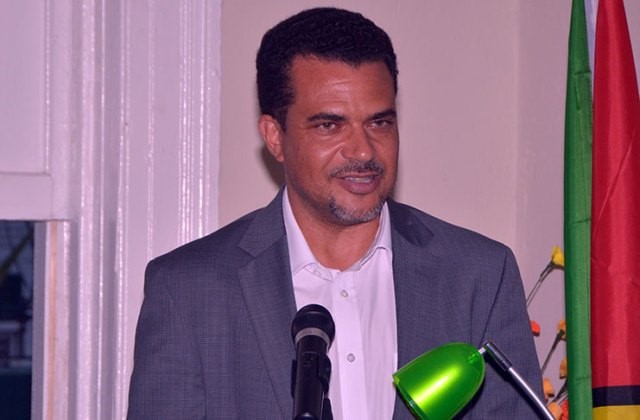 Timothy Jonas, Chairman of A New and United Guyana (ANUG), one of the small parties which contested last Monday’s elections, has raised concerns over the security of the Statements of Poll (SoPs) that were left behind at the Guyana Elections Commission (GECOM) Command Centre, which also housed the Office of the Region Four Returning Officer (RO).

Last Thursday, after the RO, Clairmont Mingo, went ahead and declared the results for Region Four (Demerara-Mahaica) without completing the ongoing verification process of the SoPs, agents and representatives from the various political parties as well as electoral observers, both local and international, remained in the building to ensure that the unverified SoPs were secured.

However, later that night, they were ousted from the Command Centre by armed ranks from the Guyana Police Force (GPF).

According to Jonas, who was also in the building at the time, they are unsure what happened to those critical documents after they were evicted from the building.

Recounting the events of that day, the ANUG Chair recalled that persons who were entitled to be in the room were there on Thursday morning awaiting the continuation of the verification process, which had been halted several times the day before. At the time, the unverified SoPs were also there in the room, but were never touched by the RO, who then went ahead and declared the region’s results.

Despite their stance, the ANUG Chairman noted that there were several interruptions and attempts to get them to leave the building, including a bomb scare.

“The A New and United Guyana representative, and every other representative, responded and say we will sit in this building and take the risk of being blown up in a bomb because we have to look at those Statements of Poll that Mr Mingo has to ascertain… After the bomb scare, we milled about, we sat down and watch the Statements of Poll. Mr Mingo made his announcement without touching the SoPs, we could do nothing but we had to watch the Statements of Poll. Eventually between 7:30pm and 8 o’clock, the Police came in and cleared the building,” he recounted.

In a letter, dated March 7, 2020 and addressed to the GECOM Chair, Retired Justice Claudette Singh, General Secretary of the People’s Progressive Party (PPP), Bharrat Jagdeo demanded, among other things, that the Commission as well as the RO and Chief Elections Officer Keith Lowenfield, “individually and collectively preserve the originals of the Statements of Poll for District 4 (Region Four).”

The GECOM Chair responded to Jagdeo’s letter on Sunday, indicating that the “issues highlighted…are duly noted”.

Nevertheless, regarding the events that played out last Thursday, Jonas on Sunday called for investigations into the bomb scare as well as who gave the orders for the Police to remove the parties’ agents as well as observers from the building.

Following Thursday’s events, Assistant Police Commissioner Edgar Thomas was removed from his commanding officer post in Region Four Sub-Division A (Georgetown) with immediate effect after refusing to execute a decision, which he opined was unlawful.

Inews understands that an order was passed down from a Deputy Commissioner of Police to remove both international and local observers along with PPP/C-nominated GECOM Commissioners from the RO’s office but Commander Thomas related that such a move would be unlawful and pointed out that executing such an order would also escalate the already high tensions at the location.

Subsequently, an order was given for Thomas to be permanently removed as Commander and a junior rank was sent to clear the building.

A senior official of the Police Force had told this online publication that persons in the building had asked Thomas to stay in the building to see that the unverified SoPs were secured properly before leaving, but they were told to immediately leave when the other set of officers arrived.

A video shared on social media by one of the party agents who were ousted from the building show persons pleading with the Police to allow them to see that the room in which the SoPs were in was secured.