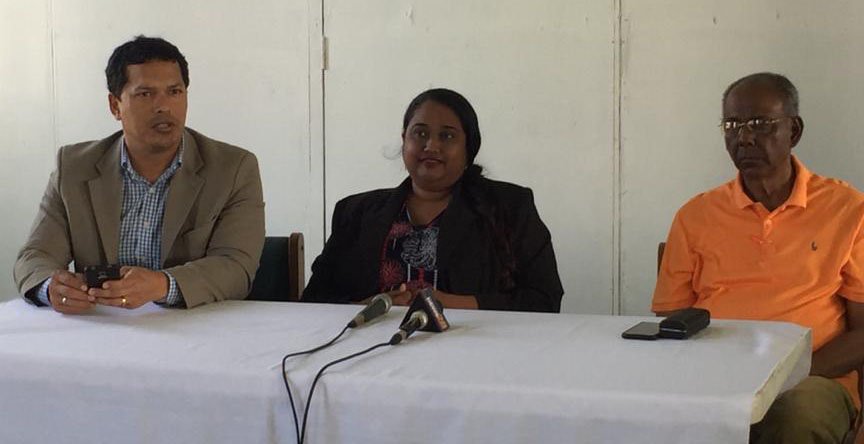 Joining their Lists of Candidates will ensure that votes cast for them will not be wasted as they seek to deny the winning party an absolute majority in parliament, leaders of the parties that have engaged in the historic move for the March 2 polls have said.

Leaders of A New and United Guyana (ANUG), the Liberty and Justice Party (LJP) and The New Movement (TNM), at a joint press conference yesterday, confirmed that they have agreed to join their Lists of Candidates for the upcoming general and regional elections. Stabroek News had reported yesterday that the leaders of ANUG, LJP, and TNM – Ralph Ramkarran, Lenox Shuman and Asha Kissoon respectively, had written Chief Election Officer Keith Lowenfield notifying that that they wished to engage in a “joinder of lists.”

The move will see the parties contesting the polls separately but for the allocation of seats in the National Assembly and on the Regional Democratic Councils, the votes they secure will be counted collectively. This would consequently improve their chances of securing parliamentary and regional seats. With the upcoming polls effectively a two-horse race between the governing APNU+AFC coalition and the PPP/C, denying them a majority in parliament is a key goal of the smaller parties who hope to be able to wield any swing seats obtained to ensure more accountability and better governance.

At yesterday’s press conference at the George-town Cricket Club, the parties’ leaders expressed confidence that they will secure seats.

“The very fact that we are here speaks of the confidence we have in this arrangement…Had we not had the confidence that this is the best formula that we could think of through this political cycle, we would not be sitting before you. So I think the fact that we are sitting at this table should be testimony enough as to our commitment and our confidence,” Shuman said.

In a subsequent joint statement, the parties said that they recognised the wisdom of the approach. “Although we are different and some of our policies differ, the central common thread unites us: the two large parties have not benefitted Guyana, and their hold on Parliament should not be by majority,” the statement said while noting that to achieve this, the three parties have utilised section 22 of the Repre-sentation of the People Act, which permits two or more lists of candidates to be joined as a combination of lists for the distribution of seats, but not for the purpose of voting.

“This means that Guyanese will be able to vote for their party of preference, be it ANUG, LJP or TNM. The votes for these parties will be counted separately so that each party will know the level of its support. At the end of the count, the votes will be combined and seats awarded to the combination of lists based on the total votes obtained by the three parties,” the statement explained.

“Each party, knowing its own votes will be able to distribute the seats in accordance with the votes obtained. However, where normally extra votes which do not qualify for a seat will be discarded, those votes for the three parties, when combined, may result in the combination of lists getting an additional one or two seats,” the statement added.

It said that the combining of lists is an opportunity to maximise their potential for gaining additional seats. “This agreement will also see an increasing level of cooperation between our parties as we move forward towards the elections, explain our policies to the Guyanese people for a better life and increase trust in our three parties as being willing and able to manage Guyana’s resources for the benefit of its people,” the statement said.

It had earlier noted that the decision resulted from the demands of supporters and other Guyanese who are clamouring for change, that the small parties unite and contest the elections as one.

“These demands arise from the generally held view that a joint effort is the best way to maximise our support and mobilise the Guyanese people for a change in the status quo from two large ethnic-based parties engaged in an ethnic struggle for dominance. Large sections of the electorate believe that the results of the upcoming contest will offer the Guyanese people no respite from severe problems of poverty, unemployment, neglect of the indigenous and hinterland communities, no opportunities for youth, poor health and education standards, corruption and no constitutional reform leading to shared governance, which afflict our society. Our people are looking for the unity of the Guyanese people to bring about change,” the statement said.

Meantime, at the press conference, Shuman said that the parties were engaged in discussions for months before reaching agreement. He expressed disappointment that they were not able to join with two other new parties, The Citizenship Initiative and Change Guyana, who are contesting the polls.

The Guyana Elections Commission (GECOM) has approved the lists of 11 parties to contest the March 2 polls. ANUG had previously announced a collaboration with the Federal United Party but on Nomination Day, the proposed coalition collapsed mere “hours” after it was finalised.

According to Section 22 of the Representation of the People Act, two or more lists of candidates shall be joined for the distribution of seats (but not for the purpose of voting) if the representative and deputy representative of each list to be so joined gives notice accordingly in writing to the Chief Election Officer not later than the 25th day before election day. It adds that lists so joined are to be referred to collectively as a combination of lists.

It was disclosed yesterday that the parties submitted their request to GECOM by 6pm on Friday.

He added that GECOM, however, had an administrative requirement. “They wanted to see any such request earlier, by yesterday [Friday]. We had some discussions with them on the extension of time. But an extension wasn’t necessary. We were able to make an agreement in time and submitted our letter yesterday [Friday],” he said.

She noted that the decision to team up was made because the parties realised that they are stronger together than divided. “We made a decision to change the political culture in Guyana because it has always been for yourselves and [first come, first served] but we would like it to be a new culture, a togetherness and working together as three parties,” she said.

Ramkarran related that they have been constantly bombarded by persons about the issue of unity of the third parties. “Well-meaning people, people who would like to see a change in Guyana, people who have the interest of the country at heart,” he said.

According to Ramkarran, they have engaged in discussions with most if not all of the parties.

After the lists were presented on Nomination Day, Ramkarran said, “We were then able to separate the sheep from the goats”.

“Those who can make it to the nomination rope and those who couldn’t and then this other opportunity opened up itself,” he added.

The party leaders emphasised that the agreement to join their lists is not a coalition but rather a collaboration which aims to change the existing political culture in Guyana while allowing all three parties to retain their identities and uniqueness.

According to her, the main factor about the collaboration is to enlighten the population that there are new parties. “The culture of voting PPP or APNU is no longer so, you have another option. I would not call us small parties, I will say there are new parties available who have their identities. For example, TNM is about youths, we are a more youth representation,” she added.

Shuman said the party will be sharing resources to represent the people’s interest while adding that they have undertaken to do what is necessary to ensure that the Guyanese people are not “shortchanged.”

“We are not a coalition. We are separate parties. What it permits us to do is to tap into resources that may otherwise not be available to each party and that is, share resources to the extent that it would represent the people’s interest at the highest level of government and we want to ensure that no person is disappointed after their final ballot is casted so that which of the three of us they vote for they will still have a voice in Guyana,” he explained.

“We have an opportunity to change this country and we fully intend on doing that,” Shuman added.

Ramkarran emphasised that joining the lists does not means that they are contesting the elections as a bloc. He said the parties are contesting separately after which the votes will be combined and calculated to determine the allocation of seats.

He stated that while the combination of lists cannot win the elections, it will ensure that the votes are not wasted.

Another important factor, he said, is the symbolism of three parties coming together.

“The symbolic nature of three parties coming together which has never happened before in Guyana’s history…The symbolism places a great deal of confidence and hope in the Guyanese people from what we have been assessing. And that will encourage them to come out and vote. And come out and vote for the party of their choice…and will give impetus to the struggle in Guyana for the creation of a situation where the two main political parties do not win an absolute majority and that influence of proposals that we combined have, we have different emphasis, the proposals that we have to put forward have a better chance of succeeding,” he said.