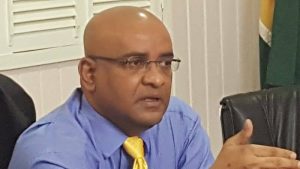 Leader of the Opposition Bharrat Jagdeo has welcomed a declaration by President David Granger that there would be no disorder or lawlessness during the holding of the March 2, 2020 General and Regional Elections.

Speaking at his weekly press briefing yesterday, Jagdeo expressed the hope that having made this declaration, Granger will “rein in those people from his party who have been on the campaign trail trying to stir up hatred that could lead to confusion and possible violence on Election Day.”

He singled out PNCR Chair Volda Lawrence as well as Minister of Finance Winston Jordan and Attorney General Basil Williams who told supporters at various meetings that they should stick around after close of poll at 6 pm to protect the ballot box.

“And after 6 o clock hit, comrades, you should already have your bath and put on your nightshift clothing. You understand what I am saying comrades? This is not a time to be caught sleeping; they must not catch us sleeping. At 6 o clock, you return to work at the places of polling and you will remain out there and let our staff inside know you are out there; just let them know everything is covered APNU+ AFC,” Lawrence told a crowd at the Kitty Market.

“I know Volda Lawrence…when she says that, it’s pregnant with meaning…it’s coded language,” he claimed adding that he has seen such action from APNU before.

He called on the Ethnic Relations Commission (ERC) and the Guyana Elections Commission (GECOM) to condemn the statements as illegal and inflammatory noting that party agents, members of the Guyana Police Force and GECOM staff are all tasked with protecting ballots.

“It’s not the mob who protects the ballot it’s your polling agent,” he stressed adding that it is illegal to congregate around polling places on elections day.

According to the Representation of the People Act it is unlawful while within a distance of 200 yards of a polling place to annoy, molest or otherwise interfere with an elector or attempt to obtain any information as to the list of candidates for whom any elector in the polling place is about to vote or has voted either on his own behalf or as a proxy on behalf of another elector.

Any person who contravenes any of the provisions of this section shall be liable on summary conviction to a fine of sixty-five thousand dollars and to imprisonment for six months.

The provision also states that any unauthorized person who obstructs or interferes with access to, or egress from, a polling place or the movement of documents, supplies and other material pertaining to an election, including ballot boxes and ballot papers shall be liable on summary conviction to a fine of $65,000 together with imprisonment for a term of one year and shall, in addition, be incapable during a period of five years from the date of conviction of participating in an election either as a voter or candidate.