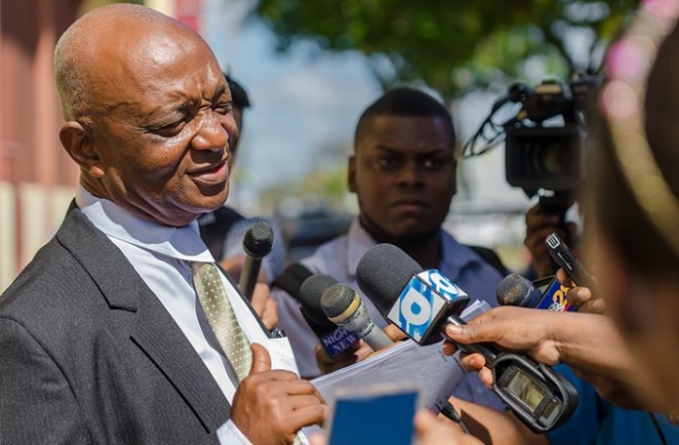 IN another twist of events, an application was filed in the High Court for the Guyana Elections Commission (GECOM) to produce the Statements of Polls (SOPs) for the votes cast in Region 4 (Demerara-Mahaica) during the March 2 General and Regional Elections.
The application – an Application for Discovery against GECOM – was filed by Bharrat Jagdeo, the Leader of the People’s Progressive Party/Civic (PPP/C) List of Candidates. Today in High Court, Justice Franklin Holder will hear arguments for and against the application.
However, ahead of those oral submissions, the Chief Elections Officer (CEO) Keith Lowenfield, through his attorney – Senior Counsel Neil Boston, objected to the application on Monday.

Outside of the Court, Boston told journalists that an Application for Discovery could only be brought by way of an Election Petition. “The Court doesn’t have jurisdiction to deal with that issue that is for an election petition” the Senior Counsel said.

According to the Laws of Guyana, an Election Petition ought to be filed within 28 days of the declaration of the results for the General and Regional Elections by GECOM. Boston made it known that the CEO is not prepared to produce the SOPs at this stage.

Jagdeo’s Attorney, Anil Nandlall was not physically present in the Court on Monday but appeared via Skype. However, PPP/C nominated Elections Commissioner, Sase Gunraj, who was present in the Court, was outraged over the CEO’s initial objection to the Application for Discovery.

“What I have observed today is a very stringent objection by those two parties’ representatives, when I say those two parties I mean the Chief Elections Officer’s Lawyer to that application. And I want to ask the question, why? Why is there a very stringent and almost violent objection to the disclosure of those documents that are in the possession of the Chief Elections Officer,” Gunraj questioned, during his engagement with the press.
Confronted with the question of an Election Petition being required, Gunraj, though not highlighting the legal basis for such a request, argued that it is an entitlement of the people.

“Citizens who vote have a right to proper and transparent processes for the declaration of their results and, the Statements of Poll, which are the conclusive evidence of the results of those elections, of course, I believe, are an entitlement of electors who participated in the process,” he reasoned.

He added: “I disagree strongly with the contention that this is not the forum and it should be for an election petition.”

Attorney-at-Law Mayo Robertson, who is representing Ulita Moore in the case brought against GECOM, its Chair Justice (Ret’d) Claudette Singh and the Chief Elections Officer, said once the arguments are submitted, it would be for Justice Holder to decide.
“Essentially, they are trying to get some information that they believe is relevant to supporting their case but there are some rules that govern what is available in these kinds of cases, and the judge will decide whether they are entitled to it or not,” Robertson told journalists outside of the High Court. The legal arguments will be made today before Justice Holder.

Jagdeo and Holladar’s application is seeking to set aside the second declaration made by the Region Four Returning Officer, Clairmont Mingo on Friday, March 13, 2020 while the application filed by Moore seeks to bar the GECOM from facilitating a National Recount on the grounds that it is unconstitutional and in breach of the Representation of the People Act.

The application to consolidate the two cases was filed by Jagdeo and Holladar last Friday, and when the matter came on Monday, Moore, GECOM, its Chair and CEO had no objections, and as such the application was granted.

“We then have to put our written submissions in relation to both matters by 4pm Thursday, and on Thursday, we may know, what date the Judge will deliver,” Boston told journalists.
According to him, the cases are being heard with a certain degree of alacrity. “So we are moving at a certain pace. Probably by Saturday, everything is over, if not Saturday, Sunday it is all over. So we are moving with a certain degree of alacrity,” he posited.
On Saturday March 14, President David Granger and Leader of the Opposition Bharrat Jagdeo, following an intervention by the Caribbean Community (CARICOM), had agreed that a national recount was necessary but by Tuesday, March 17, Moore secured an interim injunction blocking GECOM from facilitating the national recount of all the votes cast at the March 2 Elections.

Moore secured a total of four interim orders, which will in effect brought the electoral process to a halt until the judicial review is completed. In the FDA, Moore is seeking a total of 25 declarations from the High Court. In effect, the declarations, if granted, would set aside any decision of the Elections Commission to facilitate a recount, thereby paving the way for the Chief Elections Officer to submit his report to the Elections Commission for a final declaration of the results of the March 2 General and Regional Elections. Once this is done, GECOM will inform the Chancellor of the Judiciary and the President will be sworn in.