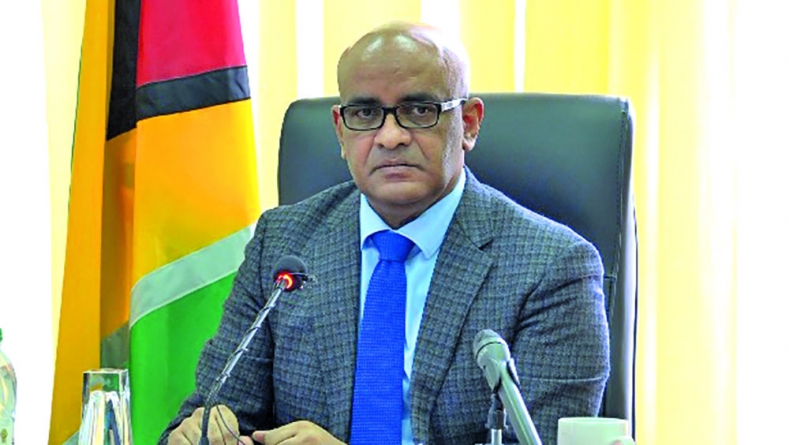 With Guyana set to become an energy powerhouse in the Region following discoveries of massive oil and gas resources, Vice President Bharrat Jagdeo is adamant that there are enormous opportunities available in the private sector for the country’s huge Diaspora.

“We have a growing private sector…unlimited opportunities, and the first preference should go to our people who live here in Guyana and who live abroad. So, they (Diaspora) have to start looking, and engaging here, setting up businesses, getting into services, coming down now and doing joint ventures,” Jagdeo said during a recent interview programme with Globespan.
Pointing to strict Local Content Legislation in the making, the Vice President posited that the Government is currently shaping an oil and gas sector where there is “a huge margin of preference for Guyanese.”
“It doesn’t matter where you live, here or abroad, some of the services can only be outsourced to Guyanese, so if you have professionals etc, and if there is a minimum amount of spending that the oil and gas companies have to do to pursue to qualify in Guyana then that spending will go to Guyanese,” Jagdeo declared.

He noted that the investments by Exxon alone would be upwards of 20 billion US dollars.
“We are trying to shift the industry that services the oil and gas sector into Guyana, so our oil and gas sector is not serviced from Trinidad and Tobago and the United States.”
The VP explained that if Guyana has support services; that would be another 40 billion US dollars investment. He noted that represented therein, are huge opportunities for young Guyanese professionals and Guyanese investors from abroad as a whole.
“We want our people to come to have the preference,” the VP declared.
Commenting on the issue of members of the Diaspora who have expressed an interest to serve in the public sector, Jagdeo noted that there is a mistaken impression that the Government sector can absorb a large number of people.

“There are not that many opportunities in Government, and there are large numbers of people in the Diaspora…in a Ministry you need 5, 6, 7 technical people, not hundreds.”
He also bemoaned the fact that very often the salary requirements of such persons are way above what is offered locally.
Meanwhile, Jagdeo noted that currently there is the structure being built by the Government, through the Ministry of Foreign Affairs, to have a more meaningfully engagement with the Diaspora.
On this basis, he revealed that the Government is hoping to establish a Diaspora Desk in the major capitals where there are large numbers of Guyanese residing.

He added that the heads of the various missions will be briefed on their approach to the issue of diaspora engagement so that their work will be in line with what the current administration is hoping to accomplish.
The Washington based Center for Strategic and International Studies (CSIS) in a recent report stated that Guyana’s emigration rate, which skyrocketed in the 1960s due to the hardships created by the then Peoples National Congress (PNC) Government, is one of the highest in the world, numbering about 30,000 annually.

The report ‘The Guyanese Diaspora’ which was authored by Michael Matera, Linnea Sandin and Maripaz Alvarez, provides a comprehensive analysis of the Guyanese Diaspora and suggests a framework within which this valuable asset could be utilised for the benefit of both the Diaspora and their home country.
According to the report, the first-generation immigrant Guyanese diaspora today is estimated to be around 550,000 worldwide, not including their descendants.

The People’s Progressive Party/Civic (PPP/C) Administration has expressed its desire to work collaboratively with the Diaspora stating that they too have a stake in the development of their homeland.
“We must welcome back to their homeland our diaspora who played such a positive and constructive role in defense of our democracy,” President Dr Irfaan Ali had said when he was sworn in on August 2.
“My government intends to embrace Guyanese abroad as we enlist them here at home,” Dr Ali had asserted.

The major oil discoveries have caused Guyana to be placed in the international spotlight and many Guyanese in the Diaspora have expressed an interest to return to work or invest here.
Chief Economist for Smith’s Research & Gradings, Scott B. MacDonald recently expressed that Guyana’s economy is tipped to perform extremely well, and ride through the COVID-19 pandemic in better shape than practically any other economy on the planet.
The Ministry of Foreign Affairs and International Cooperation recently announced that it has begun taking active steps to make it easier for the country’s large Diaspora to return to their homeland, either to work or invest.
On this basis, the Ministry launched a Remigration Brochure, which seeks to fill the information and other support gaps, which have prevented persons in the past from starting the process to return ‘home’.