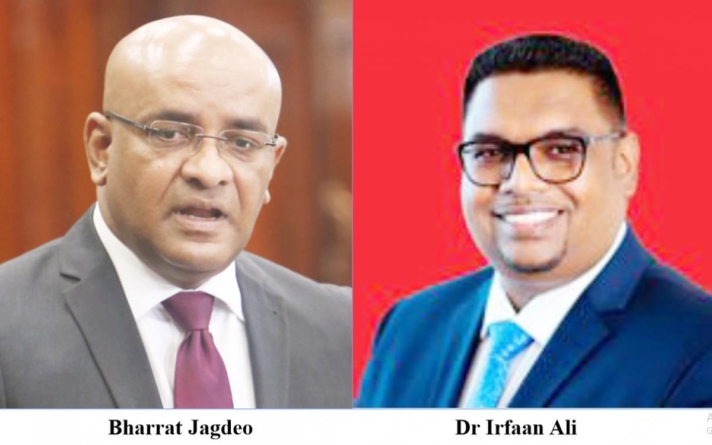 The views expressed by the PPP/C’s presidential candidate Dr Irfaan Ali on how the party intends to deal with current oil & gas contracts should the party win the upcoming General and Regional Elections,  reflects the party’s position and should not be disputed, General Secretary Bharrat Jagdeo says.

“Irfaan has made it clear how the PPP/C intends to move forward…he made a post following the Reuters story and what he says is the party’s position,” Jagdeo told the Stabroek News when contacted.

On the sidelines of a January 18th campaign rally at Anna Regina in Essequibo, Region Three, Reuters said that Ali informed that an Ali-led PPP/C government would “keep the Exxon contract intact” but review and push for renegotiation of others signed after 2015.

The article quoted Ali as saying that Exxon was a pioneer investor here and “a different case” which he would not look at for a renegotiation, should he become president. “Exxon was a pioneering investment,” Reuters quoted Ali as saying. “But those that came after that time they were not pioneering, so they have to be examined in totality,” he added.

The state-owned Guyana Chronicle on Friday reported and headlined that Jagdeo had “dismissed” Ali’s position.

And even as he refuted the Chronicle’s report, which he said that he “expected to be twisted,” Jagdeo pointed to Ali’s Facebook post where he elaborated on the Reuters article and stated his stance saying that Ali speaks for party and it is why he is its presidential candidate.

“I have noted the headline in a Reuters report today (Monday, January 20, 2020), titled, ‘’Guyana opposition candidate pledges to keep Exxon contract intact.’’ I wish to reiterate my position and that of the People’s Progressive Party/Civic (PPP/C) on this matter. We have consistently said that production contracts post-ExxonMobil must be and will be renegotiated as these contracts would have been signed when Guyana was already de-risked. The terms of some of these contracts are even more lopsided than that of the Exxon contract, e.g. the Tullow contract which has a 1% recoverable royalty rate,” Ali stated.

“In the case of Exxon, I made the point that they are on a different footing as a pioneer in the sector and as such we will review that contract to ensure that the administration of the contract brings greater benefit to Guyana and Guyanese. This review must allow for better contract administration and greater local content,” he added.

The PPP/C has flayed the current APNU+AFC’s handling of the petroleum sector and has pledged to have the necessary legislative framework installed in six months were it to win the March 2 general elections.

“These failures range from the indefensible renegotiation of the ExxonMobil contract in 2016, where Guyana was in a position of strength, having confirmed a find of three [billion] barrels of oil, to the fact that Guyana is still without the necessary architecture that would guarantee management of the oil & gas sector, where global best practices, transparency and accountability are the order of the day”, the PPP said in a statement following first oil.

Freedom House said that the renegotiation of the ExxonMobil Production Sharing Agreement (PSA) involving “compromised APNU+AFC Coalition officials” resulted in losses for Guyana and tops the list of the Coalition’s indefensible failures in the oil & gas sector.

Citing denials by government officials in 2017 of a signing bonus, the PPP noted that “US$18 million was, in fact, received a year earlier, since September 2016. The Guyanese people were only made aware of this fact in December 2017. Guyana’s national budget estimates for 2017, 2018 and 2019 did not reflect receipt of the US$18 million, which is what should have been done. How then can (President David Granger)  be trusted when he claims that the Coalition will ‘manage petroleum revenues prudently to ensure fiscal discipline’ when Guyanese are aware of the evidenced failures with the first receipt of oil monies?”

On the architecture for the management of the sector, the PPP lamented that Guyana is nowhere close to where it should have been five years since the oil find was confirmed in May 2015.

Second, it said that the Petroleum Commission, which was supposed to be the regulatory body, is non- existent. It said that the APNU+AFC Coalition seems to have replaced that body with the Department of Energy, which reports to the President.

Third, after five years, the PPP said that there is still no Local Content Policy, noting that this is one of the key means of ensuring that Guyanese benefit in a direct way from the operations in the oil & gas sector.

The PPP/C said that it has made it clear that the entire architecture for proper and transparent management of the oil resources will be completed in six months, were it to win the upcoming General and Regional Elections.

“What is clear is that the Granger-led APNU+AFC Coalition has not worked to ensure Guyanese benefit fully from ‘first oil’ or the oil & gas sector for that matter. Instead, he is attempting to lull Guyanese into the belief that with ‘first oil’ here today, we are going to be prosperous tomorrow”, the PPP said.

It also rapped the government over what it termed its secret move to sell Guyana’s share of ‘first oil’.

“It should be a source of shame that it was the international media house, Bloomberg, which exposed the APNU+AFC Coalition’s plans to approach traders directly, ‘face-to-face’, to conclude deals for them to buy Guyana’s oil and sell it”, the PPP said.

The PPP added that while ‘first oil’ should have fueled the hopes and aspirations of Guyanese across the country it has subsided into a cause for greater apprehension about our future, due to the incompetence and corruption that the APNU+AFC Coalition has demonstrated in the developing sector over the past four-plus years.

There can only be advances if the oil monies are well managed and the APNU+AFC Coalition has demonstrated its inability in this regard, the PPP charged.

Government has also taken a blasting from the party over the recent fireworks and champagne reception it held to celebrate first oil where both the party leader and presidential candidate stressed that the celebrations should have been “people centred” and not held at a high end hotel with only an elite few.