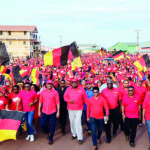 The People’s Progressive Party/Civic (PPP/C) held its rally in Lethem, where a mammoth crowd of residents from the Rupununi district on Sunday turned up to listen to the Party’s plans as outlined in its manifesto.

Among the Party speakers were General Secretary Bharrat Jagdeo. He told the gathering of thousands that the PPP is “no fair-weather friend” but rather, a Party that would fight for their rights and support them, no matter what. He noted that the Party’s track record of investing in Indigenous communities differed sharply from that of A Partnership for National Unity/Alliance For Change (APNU/AFC).
“I recall one time when we got some kids from the hinterland to go to President’s College, in Parliament (someone) said we’d lower the standards of President’s College. Guess what, three years later a child from the hinterland topped President’s College. Simply because people were not getting opportunities over those years.
“It was a slow, tortuous path to development,” Jagdeo recalled. “And we had to do this with very little money. In 1992, when we took office, we were bankrupt, totally bankrupt. We were using 153 per cent revenue to service debt. We had very little to start with. And over the years, we were able to spend more. The Presidential Grant started building things in the villages, helping people.”
According to Jagdeo, the Government’s mantra has been about “bullyism”. He told the crowd that the coalition’s primary motivation in coming into their villages was because there was an election approaching.

However, Jagdeo reminded the residents of Region Nine (Upper Takutu-Upper Essequibo) that the Government dropped the ball for years when it comes to titling Indigenous land, despite money being available for it from the Low Carbon Development Strategy (LCDS) that the PPP left behind.

“What did they do in the last four years? We left them US$10.2 million, under the LCDS Norwegian fund for land titling for the Amerindian people. Because under the PPP, it moved from six per cent of Guyana to 14 per cent. And we were continuing this. They promised this in the last elections.

“And they did not a single village until (recently), they hurriedly did two of them. They broke every single promise. In fact, a Keith Scott, one of their Ministers in Parliament, stood up and they all listened to him say Amerindians are greedy people: if they get more land, they must not benefit from oil and gas money.”
It was only in September 2019, days after it was heavily criticised over its handling of land titles and extensions within Guyana’s Indigenous community by the Opposition, that Government announced that eight communities will be receiving either their title certificates or extensions.

Again after heavy criticism by the Opposition, Cabinet recently approved the absolute grants under the Amerindian Land Titling (ALT) Project, which is funded by the Guyana REDD+ Investment Fund (GRIF) to the tune of US$10.7 million.
In May 2018, Indigenous Peoples’ Affairs Minister Sydney Allicock had told the Parliamentary Sectoral Committee on Natural Resources at the National Assembly that some $500 million has been spent on the Project. The ALT Project was extended by the coalition Government from 2016 to 2018 and then again from 2019 to 2021.

The Amerindian Act of 2006 states that a village may apply in writing to the Minister (of Indigenous Peoples’ Affairs), in order to receive a grant of State lands as an extension to its village lands.
Further, Indigenous communities can apply in writing to the subject Minister provided that they have been in existence for over 25 years at the time of application and for the immediately preceding five years, they comprised at least 150 persons.
However, the Act does not require a Village Improvement Plan for the processing or granting of land extensions to any Indigenous village or community. This is in contradiction of the excuse proffered by the Government for the slow progress in land titling over the years.