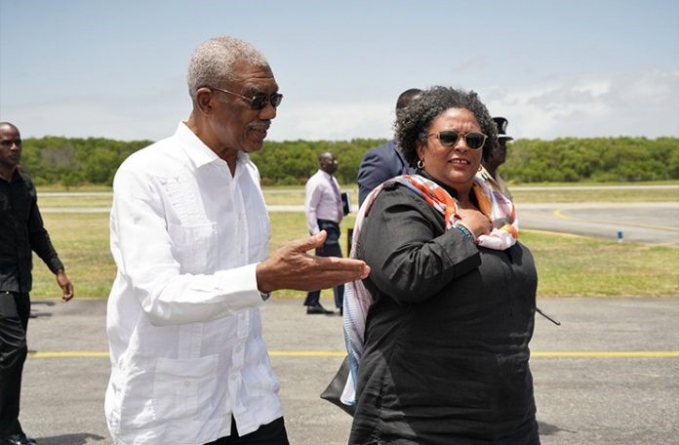 Though agreeing to have a high-level team from the Caribbean Community (CARICOM) supervise a recount of the votes cast during the March 2 General and Regional Elections, President David Granger says the proposed initiative must be executed in accordance with the Constitution of Guyana.

In his address to the nation on Sunday, the President said he communicated his position to CARICOM Chairman, Prime Minister Mia Mottley of Barbados during a teleconference earlier in the day.

“…the CARICOM Initiative should operate within the legal framework of the Constitution of Guyana, and respect the role of the Elections Commission and the rulings of the Supreme Court. It will not act independently,” President Granger said.
In his communication with the CARICOM Chair, President Granger also indicated that the Guyana Elections Commission (GECOM) should be allowed to craft the Terms of Reference governing its relationship with the CARICOM team.

“The organisational structure which should embody supervisory and technical elements should be determined by the Elections Commission,” the President said.

The CARICOM team arrived here on Saturday on the instruction of PM Mottley, who had secured an agreement from both President Granger and Leader of the Opposition Bharrat Jagdeo for a national recount to be done after the tabulation of votes for Region 4 (Demerara-Mahaica) faced a mountain of challenges, and the integrity of the process was questioned. On Sunday, the President recommitted to the proposed initiative placed on the table by CARICOM.

“The Government of Guyana looks forward to ‘a total national recount’ being completed as soon as possible under the auspices of the Elections Commission,” he said.
He explained that the delays in the declaration of the results for the General and Regional Elections, coupled with the statements by the various observer missions, resulted in CARICOM fielding a five-member delegation of Prime Ministers to Guyana on March 11 and 12 to meet with key players in the electoral process.

PM Mottley was accompanied by Prime Ministers Dr. Keith Rowley of Trinidad and Tobago, Roosevelt Skerrit of Dominica, Dr. Keith Mitchell of Grenada and Dr. Ralph Gonsalves of St. Vincent and the Grenadines.

The high-level CARICOM team comprising former Attorney-General and Minister of Foreign Affairs of Dominica, Francine Baron; former Minister of Finance of Grenada Anthony Boatswain; Senior Lecturer in the Department of Government of UWI Cynthia Barrow-Giles; Chief Electoral Officer of Barbados Angela Taylor; and Chief Elections Officer of Trinidad and Tobago Fern Narcis-Scope was subsequently dispatched to Guyana following the agreement for a recount.

RULE OF LAW
Iterating his commitment to the rule of law and the Constitution, President Granger said he respects the integrity and autonomous nature of the Elections Commission, and will abide by its declarations and the rulings of the Court. He said that in the absence of such declarations, GECOM must be allowed to do its work as it seeks to bring the electoral process to an end.

The Head of State was keen on noting, however, that the General and Regional Elections were conducted peacefully, and in accordance with the Constitution and Laws of Guyana on March 2, 202, but the events that followed it thereafter marred the excellent work of the Elections Commission.

“Confusion ensued at the Office of the Returning Officer for District Four in the wee hours of Wednesday, March 4, 2020 as a result of an invasion of the premises by political elements. Statements following the events of March 4 by the observer missions also created uncertainty in the minds of the citizenry. The Opposition People’s Progressive Party (PPP) so far approached the Supreme Court on three separate occasions to obstruct the work of the Elections Commission,” President Granger summarised.

He said that those actions, coupled with calls for a recount, allowed for the Supreme Court to determine the way forward.

“I advise you to avoid provocation by certain lawless elements, who committed acts of violence against innocent schoolchildren, nurses and police officers. Guyanese, as we await the conclusion of the electoral process, we must be reminded of the very difficult public health environment occasioned by the Coronavirus Disease 2019 (COVID-19),” President Granger said, adding: “I appeal to the public to remain calm, and to implement all the advisories relating to personal hygiene, social distancing, and overall infection prevention and control.”

On Saturday, the GECOM Chair also recommitted to having a recount done, and in keeping with that commitment, summoned the six Elections Commissioners to a meeting to chart the way forward.