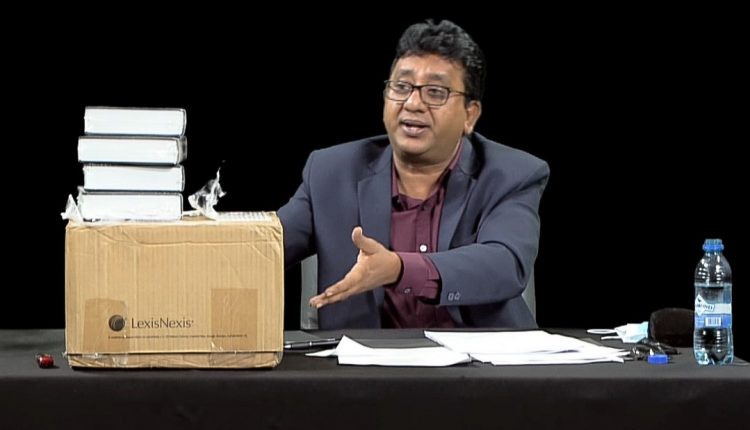 Attorney General and Legal Affairs Minister, Anil Nandlall had disclosed that an audit done back in 2016 had exonerated him from any wrongdoings regarding the 14 Commonwealth Law books, which he was wrongfully accused of stealing by the APNU/AFC coalition regime, yet charges were still filed against him.

During a recent press conference, Nandlall, who had previously served as Attorney General between 2011 to 2015 under the Donald Ramotar Administration, recalled that when the matter initially came up back in 2016, he had explained that the law books were purchased by the Ministry for him as part of his contract of service. It was agreed that the Government of Guyana would stand the expense for his subscriptions for the Commonwealth Law books to the tune of $2.3 million. He had subscribed to Lexis Nexis, the publishers of the law reports.

He noted that his predecessor, former Attorney General Basil Williams, had ordered an audit into the matter in February 2016. Nandlall disclosed on Saturday that in its report, the Audit Office of Guyana concluded that, “The Commonwealth Law Books/Reports acquired by the Ministry were not subject to storekeeping procedures and were not required to, since the Commonwealth Law reports purchased by the Ministry during the period was delivered to the former Attorney General and Minister of Legal Affairs, Mr. Anil Nandlall, as part of his conditions of service as Attorney General and Minister of Legal Affairs.”

This finding by the Audit Office came to after former President Ramotar had corroborated Nandlall’s claims. In a letter to the Auditor General during the probe, Ramotar explained that he had entered into an arrangement with his Attorney General Anil Nandlall to allow him to buy law books for his personal use as part of his employment agreement.

Despite this, however, charges were still instituted against Nandlall by the Special Organised Crime Unit (SOCU) for larceny of the law reports and he was arraigned in April 2017.
“So, this audit report exonerated me with those books from any wrongdoings but nevertheless, Basil Williams instructed and directed SOCU to institute those charges against me. When the charges were instituted, I said publicly that it was never a matter of the books, it was a matter of principle. Those books are my property and I’m not going to give up my property. I said that then and that is my position now,” he asserted.

Although Nandlall had challenged the charge to have it quashed in the higher courts, the matter is still pending in the Magistrates’ Courts.
Nevertheless, the new Attorney General posited that he will not use his influence as Minister to interfere with the administration of justice regarding this matter against him but instead will have to “see how that proceeds”.

Nandlall went on to say that while an injustice was done to him, those very law books he was charged for played an instrumental role in getting the APNU/AFC coalition out of office.
Following the March 2, 2020 elections, a series of litigations had ensued.
“Those very books were very instrumental in removing them from office. If you were listening to the political cases, you would’ve heard how many cases were cited from India, from New Zealand, from Australia and from throughout the Caribbean – well they were all in those books… So those books served the very purpose of putting them out of office,” Nandlall asserted.

He further outlined the importance of him defending himself in this matter, and his property as well, noting that he would be unfit to hold the AG post if he could not have done so. Still maintaining that he had done no wrong, Nandlall revealed that he had even purchased the same series of law books and offered to donate it to the State but they were never accepted.

At Saturday’s virtual press conference that was live-streamed, he displayed the untouched books – unboxing them for the public to see and even offered them to whichever arm of the State would like to have them.

“These are the books I bought for them but they refused to accept it and they proceeded with charging me for larceny. So, it was never a matter of the books. I can donate the entire volume to the State but it was not that. It is a matter of principle and I would’ve gone to jail, if possible, for my own property, in defence of what I believe is right,” he contended.