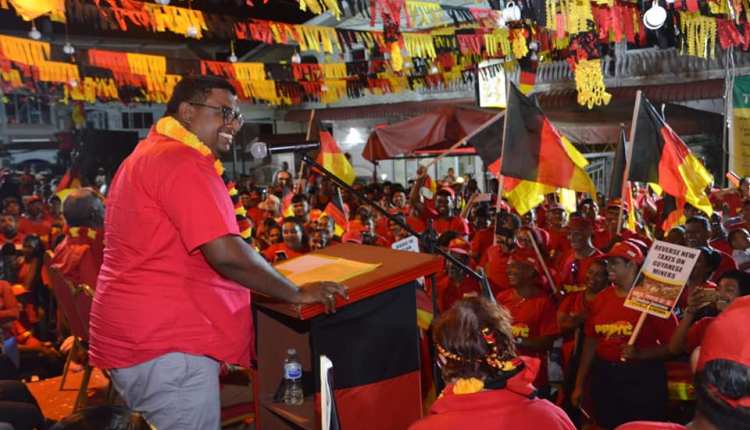 Irfaan Ali, the Presidential Candidate of the PPP, on Saturday night pledged a plan to return the mining sector to prosperity in an appeal to citizens of Region Seven for whom the industry has been their “bread and butter.”

Speaking at a rally in the town of Bartica, Ali pledged that if elected to office, a PPP Government would reverse VAT on machinery and equipment used in the mining sector and push $2 billion in the first PPP budget into fixing the roads which lead to the mining hubs.

Under a PPP Government, Ali said miners “will never see any increase in taxes” that are burdensome to their operations, increase expenditure or the cost of goods and services.

“We have to make this sector sustainable, vibrant – the engine of growth for this region,” he declared.

The PPP is looking to increase voting fortunes that have been a stronghold of the PNC, the main party in the APNU+AFC Coalition bloc. In the elections last time, the PPP received 2,981 votes in the region while the Coalition received 4,599 votes.

Bartica is known as the gateway to the interior with rich lands for mining. Ali cited the closure of dredges was due to bad policies by the current Government.

“This is unacceptable; we have to and we must put back those dredges and those operations back to work,” he stated.

Ali said the cost of fuel and transportation has proven burdensome to miners and promised the PPP would “address the fuel issue,” making it “cost effective” to miners.

The current Coalition Government has had a testy relationship with the miners’ body, the GGDMA. In August 2018, the miner’s association criticised the Government for what it says is the “ongoing neglect, corruption, shakedown and extortion and now murder of miners at the hands of the security forces and appointed government officers.”

“No one in the Government is doing anything to help miners, they are just applying pressure. We are demanding our respect,” the GGDMA declared.

Late last year, Andron Alphonso, the new President of GGDMA pledged to fight “tooth and nail” against policies that threaten to desolate the industry and he has urged miners and their families to vote at the March 02 general elections for the party that backs mining.

According to the GGDMA, an estimated 100,000 Guyanese adults are involved either directly or indirectly in the local mining industry and that could be a source of significant political influence.

Alphonso said that the GGDMA has always been an independent body but now it wants its membership to vote on a mining agenda and think about the future of mining.

He said the fight for the GGDMA includes the fight to ensure that policies detrimental to the industry were not adopted.

Last year, gold declarations totalled 634,905 ounces and amount to 18,682 ounces above what was declared in 2018. Licensed gold dealers who purchase from small and medium scale gold miners, contributed approximately 57.69% of actual declarations.

During his time in office, from 2011-2015, President Donald Ramotar tried to get the project, named after a Venezuelan firm, restarted but to no effect.

The current Government had also pledged to get the project going but it also did not happen.