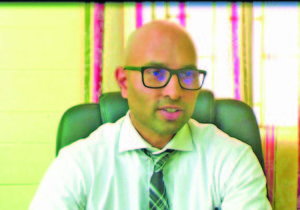 AS developmental efforts in Guyana continue to increase, entrepreneurs, who are supported, will be able to make significant, sustainable investments, according to the Chairman of the Private Sector Commission (PSC), Nicholas Boyer.

At a recent forum organised by the World Wildlife Fund (WWF)- Guianas, Boyer highlighted that there are challenges which could plague Guyana’s long-term growth and development if sustainability is not a key focus. He emphasised that the exploitation of finite resources, such as oil and gas, should not be the sole developmental focus.

“We have to spend the funds coming in from the oil offshore, and spend it in a way that unlocks infrastructure and the power of our human capital,” Boyer said.
Importantly he emphasised: “I really believe we have solid entrepreneurs, and once we give them the tools, in terms of infrastructure (including) roads, potable water, electricity, Information and Communication Technology (ICT) and being able to have that capable infrastructure, we will allow our entrepreneurs to find new avenues of doing more sustainable business, whether it is agro-processing and finding more export markets.”

Research has shown that entrepreneurs, called “calculated risk-takers”, are often drivers of innovation, creating novel business solutions and positioning themselves to tap into largely unexplored markets.

Cognisant of the role entrepreneurs can play in spurring innovation and contributing to economic development, the Government has taken a step to establish a National Entrepreneurship and Innovation Council which, it believes, will serve as a conduit for transformation and innovation.

“This body will radically reform the culture of entrepreneurship and encourage the emergence of new entrepreneurs while supporting existing ones,” said President Irfaan Ali during the American Chamber of Commerce’s (AMCHAM’s) virtual Annual General Meeting (AGM), earlier in November.

This initiative is seen as part of the overarching vision to create an enabling environment for business development. As it is now, there is a seven-point plan which includes preserving the rule of law and democracy; improving the ease of doing business; enhancing national competitiveness; facilitating trade and investment; and supporting small businesses.
Additionally, entrepreneurs are known to contribute to local, community economies by first tapping into their networks and spheres of influence before expanding operations, once successful. And Boyer was optimistic that, with adequate support, local entrepreneurs could take advantage of the opportunities which are being presented as Guyana develops alongside its burgeoning oil and gas sector.

‘Not impossible’
Boyer also said that, with the increased development taking place, there is scope for investing in wholly renewable projects. He reminded that the cost of energy locally is exorbitant, more so when compared to the rest of the Caribbean region. And of the enticing oil and gas projects has been the proposal to bring natural gas onshore and use it to supply cheaper, cleaner energy to Guyana.
But that’s not all. With energy costs driven downwards, more downstream activities could be created or developed. As these activities flourish and revenues are garnered, Boyer explained that large projects such as the Amaila Falls hydropower project would begin to seem more achievable.

From the preliminary estimates, the Amaila Falls Hydro Project (AFHP) is expected to cost just under US$1 billion and will be able to generate 165 megawatts of stable and reliable electricity for 11 solid months of the year, with the additional month during the dry season being used for scheduled maintenance.
And Boyer was upbeat that, with the right investment climate and requisite development in place, this project which was shelved by the previous administration, is not impossible.