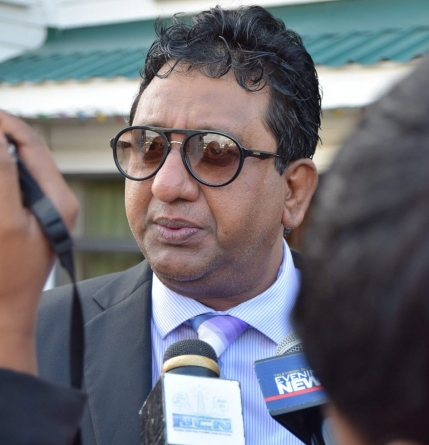 If the travel restrictions imposed on Guyana’s top Government and electoral officials do not result in meaningful changes, it is more than likely that international powers will step up the level of sanctions needed to compel those officials to abide by the rule of law and ensure that the will of the people is respected.

This is according to PPP/C Executive Member and Attorney-at-Law, Anil Nandall, who related that the sanctions imposed on caretaker President David Granger and his top officials did not come as a surprise, saying that they were “long overdue”.

Nandlall pointed out that the Granger Government and others involved in the administration of the elections, were given the necessary warnings before of the growing intolerance of the international community as it relates to electoral fraud in Guyana.

“They were warned, look at the length of time that they were given, and they still persisted,” Nandlall posited during a virtual interview programme titled ‘Government in Transition’ on Wednesday.

“We have been saying all the time, we live in a global village, that the world has changed, authoritarianism, political dictatorship, violation of the rule of law…will not be tolerated in this hemisphere anymore. Sanctions will come personally and they will come nationally…I have no doubt that this is not the complete package, the other countries will follow.”

According to Nandlall, the sanctions will have one of two consequences. “It can bring these people who are on a path towards madness back to reality and to their senses, or it can drive them further down the road to insanity,” he said.

Nandlall, a former Attorney General and Minister of Legal Affairs under the PPP/C Administration, explained that there are various forms of sanctions available to the international community which they could apply on governments that seek to hang on to power through fraudulent means.

“Normally the greater the wrong, the greater the punishment, so let us see if the travel restrictions, if they do not achieve the objective. And then they will have to take it to the other step; which will involve the freezing of assets and bank accounts and then confiscation of assets, and finally, perhaps physical invasion,” he explained.

Nandlall expressed shock at the level of “disrespect” meted out to the international community by the supporters and leaders of the APNU/AFC.

“They started to hurl abuses, look at the level vilification, vitriol and abuse that they have hurled at these diplomats and these international agencies, making racial allegations against them…chasing them out of our country.”

According to Nandlall, this was all done just because the APNU/AFC Coalition did not succeed in their effort to “steal the government”.

In relation to the expected impact the visa sanctions would have on Granger’s Government and others, Nandlall posited that the nation would have to “wait and see”.

However, he pointed to the recent move by the Permanent Council of the Organisation of American States (OAS) to discuss the Guyana situation adding that, “when it reaches that level…it is at that place where you take the most extreme measures available under the international conventions, that we have signed on to”.

“When you sign on to these international treaties, under international law…you sign and you pledge to bind yourselves, so when they start to activate against you there is no place to run”.

Nandall posited that Granger and his government should seriously take into consideration the array of sanctions that would come post travel restrictions “so they can understand and appreciate the dangers to which they are exposed”.

International Powers are mounting pressure on Granger and his APNU/AFC Coalition to concede defeat and “step aside” so that the duly elected government could take its place.
The national recount has shown that the Irfaan Ali-led PPP/C has won the elections with 233,336 votes. But Granger and a few of his top aides, with the help of elements within the electoral machinery, are refusing to give up power.

US Secretary of State, Mike Pompeo, announced that visa sanctions have been imposed on top Government and elections officials and all others who are involved in undermining Guyana’s democracy.

“Today I am announcing visa restrictions on individuals responsible for, or complicit, in the undermining of democracy in Guyana. The immediate family members of such persons may also be subject to restrictions,” Pompeo said during a State Department briefing on Wednesday.

“The Granger Government must respect the results of democratic elections and step aside,” Pompeo asserted.

In a statement on Wednesday, Global Affairs Canada, also demanded a “swift and transparent” conclusion to the electoral process and pledged to hold accountable all those persons who prevent it.

The United Kingdom authorities have also begun discussions on imposing sanctions on government and elections officials who are undermining Guyana’s democracy.