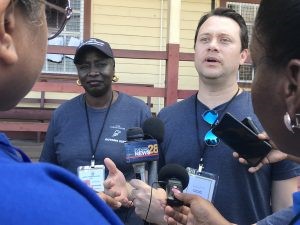 The operation of yesterday’s General and Regional Elections went smoothly and without any major hiccups.

This was based on reports provided by international observer missions—the European Union (EU), Commonwealth Observer Group, the Carter Center, and the Organization of American States (OAS).
The day began early for the observer missions, who all wanted to see the opening of the 06:00AM polls. During their brief press conferences, heads of the missions were emphatic that at the time, there were no tensions at the various polling stations they visited.

Former Prime Minister of Barbados and Chairman of the Commonwealth Observer Group, Owen Arthur, explained that the Commonwealth has had a long tradition of observer missions all across the region in its pursuit of good governance and transparency.

Against this backdrop, he assured that his observer mission would ensure that they achieve their goal.
Arthur added, “We have been fulfilling our duties to observe. We were there just when the polls opened and it would appear as though the elections are being conducted in an orderly fashion.”
Co-leader of the Carter Center observer mission, Jason Carter, concurred with the positive reports of the other groups, but urged Guyanese to be patient as they cast their votes.

During a press engagement with the Former Prime Minister of Senegal, Aminata Toure, Carter stated that the centre has only seen a “little snippet” of what the election is like, but believes that Guyanese need to be patient.
He added that we should not look at the election period as a report from one region or polling station, but the entire country.
He continued, “And so part of the patience is going to be listening to the reports as they come in and know that we have to see the complete picture before we make a judgment.”

Carter explained that the centre is operating separately in an effort for them to cover more ground.
“This is one of the most important aspects of international observers and domestic Guyanese observers are just to ensure that there is transparency. And as you know, the political parties have coverage at least some of them have coverage throughout the country as well so this is a much observed election in almost every corner of Guyana.”

The other two observer missions, the OAS and the EU, shared the same sentiments as the two missions, and with over 100 team members, the missions assure that they will see transparent, credible and fair election processes.
The teams will be releasing their preliminary results to their unions and to the Guyana Elections Commission (GECOM) before the election results are announced.